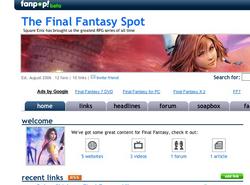 Fanpop is one of Tech Digest’s favourite Web 2.0 sites. It lets like-minded ‘fans’ – of bands, TV shows, hobbies or anything else – band together into communities, sharing interesting links and information on their interest. I interviewed co-founder Dave Lu back in August to find out how it all worked.

Fanpop has just added a new blogging feature, so besides looking at those, I’ve also compiled a list of the ten most popular fanpop ‘spots’ (the word they use for their mini-communities) to see what’s popular.

First, the new feature. It’s called Soapbox, and it’s basically a tool that allows Fanpop members to post their own original articles within each spot on the site – previously, they could only link to stuff elsewhere on the Web. Lu says it’s “for those who aren’t regular bloggers, and want an immediate audience of people who would appreciate the content”. A couple of early examples include someone musing about the best viewing order for a Star Wars marathon, and someone else posting on whether the TV show Heroes is too slow.

So what about that Top 10? What are the ten most popular Fanpop spots right now? It’s early days, as you can tell from the numbers, but a pattern is starting to emerge (albeit one of geeks in San Francisco watching Lost while stroking their iPods and blogging about what meals they like to cook..)

Out of pure sympathy, meanwhile, spots that could do with a bit of love (i.e. they’ve only got one fan) include Jakarta, Stamp Collecting, Godzilla, Justin Timberlake, and Pigeons. Timberlake’s got to be disappointed with that performance.