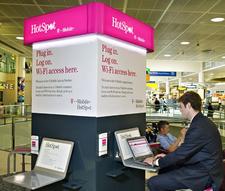 T-Mobile has launched its Wi-Fi service at Birmingham International Airport, taking UK passenger coverage to an impressive 85%. And according to T-Mobile figures, in the last 12 months, T-Mobile’s Wi-Fi in airports has processed 2,870,000MB of data.

And if you’re a regular airport user, T-Mobile is now offering the option of HotSpot access on top of an existing plan for £10 per month, with a standalone HotSpot subscription also available for £20 per month, including VAT.