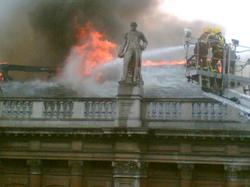 With improved cameras on our phones, we’re all equipped to capture the images that make the news. If you’re in doubt, check out Newsflash – an exhibition of cameraphone images that captured a moment.

Sponsored by Sony Ericsson and held at London’s Air Gallery, Newsflash features images taken by the British public that demonstrate how cameraphones are playing an increasingly prominent role in photo-journalism – from such extremes as a bird’s eye view of a burning church to Jenson Button’s first F1 win.