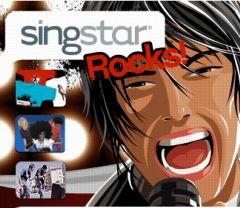 Sony have created a new karaoke singing game that is supposed to encourage even the shyest singer to ‘unleash their inner rock star’.

The SingStar technology analyses the player’s vocal performance and provides feedback based on how well or badly they’ve sung. Various game modes include “Battle Mode” which enables two players to challenge one another to get the highest score, “Duet Mode” which calls for two players to sing alternate parts of a duet, and “Pass the Mic” team games.

It comes packed with two microphones that plug in to the PS2 via a special USB converter, and for extra fun it’s also compatible with the EyeToy camera so players can see themselves singing along.

“Because SingStar Rocks! features actual songs and videos recorded by popular artists, it adds an element of realism never before seen in a singing game,” said Sarah Stocker, Senior Producer, SCEA. “Couple that authenticity with the wide variety of songs and adjustable levels of difficulty in SingStar Rocks!, and you have the perfect party game for any get-together.”

It comes with 30 songs and accompanying music videos. No doubt some marketing guru at Sony will come up with add-on packs of songs if it takes off – after all Sony do have a fairly decent music library.

At last, technology has come to the karaoke party. Now even your games console will know how badly you and your friends sing.