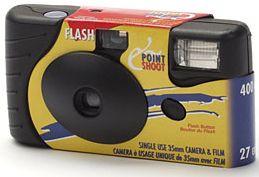 The Photo Imaging Council have released a statement outlining how environmentally-friendly single-use cameras really are.

It would be easy to think that single-use cameras are wasteful of resources (particularly in an increasingly digital age) but they’re still very popular at events where large numbers of cheap cameras are needed. So, how ‘green’ are they?

They’re a recycling success story, say the Photo Imaging Council. For many years, since the introduction of single use cameras in 1986, Kodak and Fujifilm, in partnership with a number of other PIC members, have worked together to run an industry recycling scheme that successfully keeps single use cameras out of the UK and Irelands waste stream.

Read on to find out what happens to your disposable camera once you’ve taken the pictures.

Well, assuming you’re not mad and just throw the camera away, you send it off to be processed.

Every week thousands of single use cameras are taken to
photofinishers to have the film inside developed and the pictures printed.

The cameras are designed to be easily recycled. The film can be easily removed for processing without destroying the body or components.

All UK and Irish photofinishers, including main laboratories and minilabs across both countries are encouraged by the original manufacturers to use the scheme. The empty cameras are stored at the photofinisher for collection by their waste contractor, who, for convenience and environmental efficiency, will pick
them up at the same time as their photo-effluent waste.

They’re then sorted and returned to the original manufacturer, where up to 90% of the camera components including lenses, flash units and shutter mechanisms are quality tested then re-used. The plastic bodies is remoulded for use elsewhere.

PICs Chairman, Gerry Dingley said, “This keeps the camera out of the domestic and business waste streams and addresses design for recycling or ecodesign in a popular and familiar product. The industrys single use camera recycling scheme has won several design awards. The scheme is in line with government goals to increase the amount of recycling generally  and meets sustainable development aspirations. It will also meet the requirements of the EC Directive on Waste Electrical and
Electronic Equipment (WEEE) when it comes into force in the UK in the near future.”