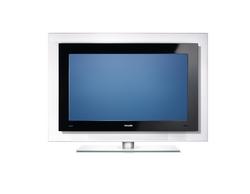 Here at Shiny Towers we are a cynical bunch. Sometimes it seems that manufacturers simply make up interesting sounding technologies so their ultimately dull products seem, well, more sexy. Occasionally though there are new technologies that do seem to work, such as Philips’ Ambilight. It’s been kicking around for quite a while now, but now the company has taken the technology to its logical conclusion with Ambilight Full Surround. Basically this means that light is projected from behind all four sides of the screen for a continuous lighting effect (earlier Ambilight TVs just had two or three lighting panels). So why do you want it?

There are two reasons. Firstly it really does seem to improve picture quality. Images seem sharper and, in some cases, almost appear three dimensional, especially when watching movies at night (and no that isn’t the effect of the cheap cider we’ve been drinking). Secondly, Philips has commissioned a load of research that proves backlighting helps to reduce eyestrain. According to the Lighting Research Center at Rensselaer Polytechnic Institute in Germany, Ambilight results in less visual discomfort, fatigue and eyestrain when watching 60 minutes of movie footage. Apparently, in a nutshell, this is because the TV creates a more favourable contrast ratio between the picture, the immediate surroundings at the side of the set and the wall luminance. However if that explanation isn’t good enough for you and you demand the full facts then check out the research at www.lrc.rpi.edu/resources/news/enews/Jan06/general308.html