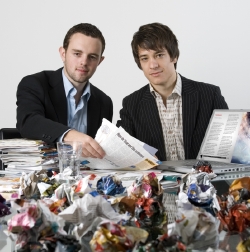 idiomag is the point where the Web 2.0 and print publishing worlds collide. It describes itself as “a virtual magazine personalised to your interests”, which you might think was just a website. Instead, it really is a virtual magazine, complete with proper page-turning, adverts and a sticky bit on the front where the free CD fell off. Oh alright, maybe not that last one.

Anyway, the big deal about idio is that you personalise it to your specific interests, telling it what subjects you’re interested in, ensuring that when you load up the digital mag, it’s just got articles that, in theory, you want to read. It’s currently in its beta stage, focusing on digital design and music.

“It really came out of my personal experience,” says founder Edward Barrow. “I’d find I wanted to buy four or five different magazines, but only wanted a few parts from each of those. So why should I buy them all?”

So why not just make idiomag a personalised website, rather than seek to ape print? Edward describes idiomag as a halfway house between print and online media, with the relaxed page-turning interface setting it apart from other websites, and also appealing more to advertisers.

“We’re starting by focusing on digital design and music, which will enable us to get a better critical mass sooner,” says marketing director Andrew Davies. “Then we’ll expand into entertainment, technology, lifestyle, automotives and so on. Music in particular is fantastic as a showcase for the concept we’re using, as it’s very good for personalisation. Everyone’s got their own specific blend of genres that they like.” 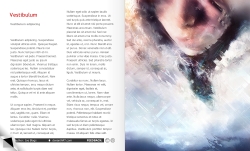 idiomag is free to sign up to, with all the revenues coming from advertising. The magazine will source content from a wide variety of writers and bloggers, sharing the revenue with them according to how many users are reading their articles. Andrew says this involves carefully cherry-picking the best content from the Web, while ensuring there is always a credit to the writer, and a link back to their blog or site.

“It’s about licensing content that’s already out there,” he says. “There’s so many people writing, but there is a delivery issue. It’s almost a hit and miss affair to get the right users reading what you’re writing. And the same is true on the ads side. There’s a huge amount of creative advertising work going on, but it’s not getting to the right people. idiomag is very much about bringing this kind of content to the mass-market.”

idiomag is in beta at the moment, with the company taking all feedback in from users to improve the technology in the months ahead. Edward says one example will be to integrate MP3 and video players into the digital magazine, so that readers can listen to and watch bands they’re reading about, for example, all integrated within one interface.

“Another nice feature is that each user can positively or negatively rate every article, which feeds back into the system,” says Edward. “It then analyses the user and that article, as their actual interests might be slightly different from what they like in practice. So over time, it evolves, and the content providers get active feedback on their articles.”

The evolution side is interesting, making idiomag a bit like TiVo or Last.fm and Pandora in the way it learns what its users like and don’t like, and evolves accordingly. This gives potential to throw in the odd curveball article that doesn’t exactly correspond with their interests, but is similar enough that they might like it.

“An article might be slightly about punk, for example, which you might not have specified in your profile, but the rest of the article’s tags match you very well,” says Edward. “So we’ll give it to you, and if you like it, our system will start to incorporate that genre [punk] in your profile.”

How about advertorials? Andrew’s argument is that there’s no need for advertorials, because the potential for rich advertising in idiomag means the adverts can be much more interesting than those in print or on websites. It’ll be interesting to see what happens if, say, a record company comes to idiomag asking to place a band profile, rather than an advert.

What about new sources of content? Right now, idiomag is based on contributions from bloggers and websites. But what if Big Media wanted to get involved? There’s certainly an increased awareness of the power of user-generated content in the media: Andrew points out that you can’t even open the Telegraph or the Times newspaper today without happening on a column about what the blogosphere is saying. UGC is making its way into the media, but could it work the other way – could the media work its way into UGC-dominated spaces like idiomag?

“Definitely, there’s no bias towards the origin of content if it’s high-quality,” says Edward, and Andrew backs him up. “At the moment we’re dealing with UGC, but over the next couple of months we’ll be talking to a couple of print magazines, and they could be integrated at some stage. Look at YouTube. It’s always been UGC, but now every big broadcaster in the world is trying to get on there with their content.”

Well, or sue YouTube for the content that’s been uploaded in the meantime by users, but we’ll skip over that. idiomag is certainly an intruiging concept, and one that’s surely made for whenever the day comes that someone produces a decent e-reader handheld device. In the meantime, the beta test is the focus for idiomag for the next two months, before a more widespread launch.

“At the very beginning of next year, we’ll roll out to different content areas and make a big push to attract more users,” says Edward. “We’re getting user feedback all the time, so that will go into making the mag an even richer experience for both users and advertisers too.”