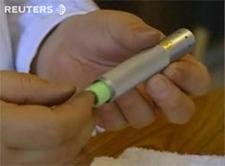 Good news for the environment, but perhaps not so good news for traditional battery manufacturers is a water-powered battery, invented by Susumu Suzuki.

The inventor has been showing off his prototype to Reuters – made mostly of carbon-based compounds and activated by just a small amount of water – just a lick will apparently set it into action. According to Mr Suzuki, the water-based batteries can be stored much longer than traditional equivalents before degrading and would cost 1/10th of the price of normal batteries to mass-produce.

And of course, they’ll be less harmful to the environment when disposed of. No news as yet of anyone keen to take the prototype one step further – if we hear more, we’ll let you know.