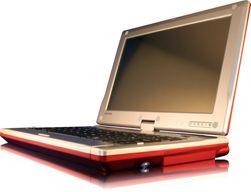 The Flybook V33i HSDPA is a pretty versatile communications device that can travel with you and be used as a tablet PC as well as a regular notebook. Though I take a little issue with the hype that it’s “as powerful as a desktop or a heavyweight laptop PC and as handy as a mobile phone” (it’s not that powerful and I wouldn’t wndant to hold it to my ear to make phone calls) its specs sound pretty impressive, and it’s impressively pretty, too, if you care about that sort of thing.

It features 3.5G HSDPA wireless ‘broadband’, plus wi-fi, Bluetooth, and Gigabit Ethernet. It measures 235x155x31mm and has a 8.9 inch display that’ll push out 1024×600 resolution (that’s widescreen 16:9 ratio). It has a touch screen that can be written on with a stylus, and the whole screen can be swivelled 180 degrees and flipped back on itself to create the tablet PC effect.

It comes with 512MB of RAM, expandable up to 2GB, can be installed with either Windows XP Home or Professional, features an Intel Pentium M 1.1GHz processor that’s low voltage and low heat, a 40GB hard drive, expandable up to 100GB, can connect to an external VGA display at up to 1800×1440 resolution in 32-bit colour.

Its connections are fairly impressive, too, with 2 USB ports, 2 Firewire, Gigabit Ethernet, modem, PCMCIA type 2 slot, headphone and microphone jacks and a built-in microphone. It also features ‘quick buttons’ including mouse left/right, PAN button and hot keys. It weighs just over 1.2kg and comes in either red or black.

One with 1GB of RAM and a 40GB hard drive will set you back £2100, so it’s certainly not a budget machine, but if you want the extra functionality it could be what you’re looking for. Alternatively, if you’re only interested in HSDPA, you could try a Sony VAIO SZ3.