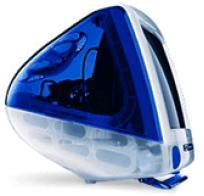 The British designer of the iPod and early ‘all-in-one’ iMacs has today be honoured by the Queen with a CBE (Commander of the British Empire).

Jonathan Ive was born in February 1967, studied industrial design at Newcastle Poly, and started his career with Apple in 1992.

There’s no denying that the 1998 iMac was eye-catching and memorable, and whilst it may not have been your cup of tea, Steve Jobs liked it.

As if that weren’t enough, his design abilities extended to the iPod, an icon of our age… or something like that.

He’s still with Apple, recently appointed as Senior VP of Industrial Design, so hopefully he’ll have something to do with future Macs, Pods, Phones, TV boxes, and whatever else Apple come up with in the future.