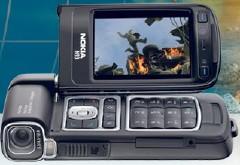 Vodafone have scored an exclusive for new purchasers of Nokia N93 multimedia computers. Nokia will launch the film Mission: Impossible 3 on 512MB memory cards on the same day the film is released on DVD, to be available for free as part of the Vodafone Nokia N93 sales package.

The film runs at 25 frames per second, and the N93 will give you full rewind, fast forward, stop and play capabilities plus stereo audio playable through the supplied stereo headset.

The film can be transferred to a PC after watching so that the memory card can be used for extra storage, though thanks to some irritating DRM the film can’t be watched on the PC or transferred anywhere else (not officially, anyway) so you are stuck to watching it on the 2.4 inch screen of your N93.

So, if you want to watch Tom Cruise on the small screen and you’ve been hankering after a N93 anyway, pop down to your Vodafone store for more info, or visit the official website.