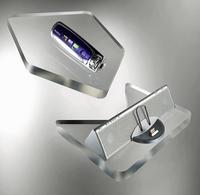 You’d be forgiven for thinking that all the docking systems are aimed at Apple. Well, most are, but Sony seems intent on redressing that balance by introducing its own range of speaker units – including the newly-announced CPF-NW001 and CPF-IX00 with Wi-Fi connectivity and the phone-friendly CPF-MP001.

The CPF-IX001 is the step-up version of the CPF-NW001 and adds a detachable module with Wi-Fi connectivity, which means a wireless connection to a PC via a home wireless router. Compatible with most commonly used digital music formats, the system plays back music from a variety types of music management software including Sonic Stage, iTunes and Windows Media Player. The CPF-MP001 docks with any phone with a ‘Fastport’ connection (found in the latest Sony Ericsson Walkman handsets such as the W950i). Connecting using Fastport docking lets you play back the music in hi-fi sound whilst simultaneously charging the battery.

The three Sony cradle audio systems will be launched between October and November. Prices still to be confirmed.