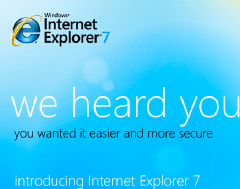 Microsoft has officially released its next incarnation of the Internet Explorer browser, version 7, its first major update in years. Its feature set aims to bring it more in line with rivals including Firefox, and includes tabbed browsing, an anti-phishing toolbar, and improved all-round security.

Microsoft have released 5 beta versions over the past 14 months, but the final release version is here. Unfortunately, and rather embarrassingly, the first vulnerability has already been discovered. Though it only rates as a 2/5 on security firm Secunia’s criticality meter, it’s still a flaw. According to Tech’s Message:

An exasperated Thomas Kristensen, CTO of Secunnia says, “It is the half-year old information disclosure vulnerability which allows malicious sites to sneak on the content of other sites which hasn’t been patched in the brand new IE7 release.”

I wonder how exasperated Net users will be with the new IE? After a lengthy period of time with IE losing browser share to Firefox and other browsers, the tables appear to be turning with Internet Explorer gaining a little ground again (depending on whose statistics you believe).

The download is available now, but won’t be rolled out en masse until November when Windows XP users singed up to receive automatic security fixes will have it downloaded to their machines.

Will IE7 make a real difference? It can be downloaded here.