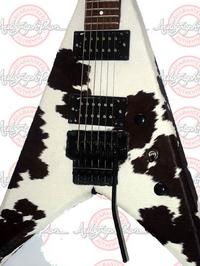 The crossover between heavy metal and cows has been surprisingly unexplored by academia, other than noting that it must be, ahem, fresian wearing those skintight lycra outfits. That joke works better if you say it, obviously.

Perhaps this eBay auction for one of Megadeth’s cowhide guitars will change things. It was played on-stage by frontman Dave Mustaine, then signed by the rest of the band and put up on eBay before you could say ‘They’re not as good as Metallica though…’. It’s a Jackson V guitar, and is going for $4,499.

Also today on Bayraider: a pair of windows used in the Amityville horror films (well, it is almost Halloween), and the raft used by the Green team in the recent US Survivor: Cook Islands reality show.