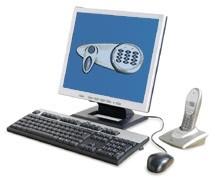 BT are all set to launch their own digital vault service which will allow broadband users to store up to 2GB 20GB of their personal data on BT’s remote servers. The service is open to anyone, not just BT broadband customers, and cost £4.99 per month. Update: A free version of the service giving 2GB (1GB for non BT broadband customers) is also available.

According to BT’s service director Emma Sanderson, many people contacted BT when their computers crashed or data was lost due to viruses. “They would pay anything to get it back once it happens.”

As digital content is becoming more important in everyday life, so the number of these backup services continues to grow. Offerings from Google, AOL, Carbonite, iDrive, Xdrive, Apple, and others, shows that it’s something companies are keen to take a stake in.

Two gigabytes isn’t a huge amount of storage, given that most PC hard drives now are at least 160GB, so you’d only want to store your most important items on it. Of course security is also a concern, plus the fact that you’re paying out money for someone else to look after your data.

I’d rather spend the money on writeable DVDs or a backup hard drive and do the job at home, but these services may be good for those that don’t want to bother with extra hardware or storage.

The service launches tomorrow, and is initially only Windows PC compatible. A free two month trial of the premium service is available.