Not content with owning the fastest computer in the world, the USA wants to keep its title, so it’s ordered one fifteen times faster. The current fastest, IBM’s Roadrunner, is designed for 1.7 Petaflops, whereas the new one should be able to crank out 20 – that’s 20,000 trillion floating point operations per second. Impressive.

It’ll be packing 1.6 million processor cores, putting my quad-core to shame, and will be based on IBM’s Blue Gene/Q supercomputer. What are they going to use it for? Managing their nuclear weapons stockpile. Yes, they’ve still got that many. It’ll occupy 96 server racks over an area the size of a tennis court, and use 6 megawatts of power.

While they’re building it, they’re building a smaller supercomputer to build the applications that’ll run on the big one. “Dawn” will run at 500 teraflops. The only thing unspecified? How much the whole project’s going to cost. I suspect it won’t be cheap.

When they’re not playing the perfect game of draughts or proving they can solve the Rubik’s Cube more efficiently than you, I’ve heard that supercomputers like nothing better than a salubrious game of “Go”.

As much as anything, they enjoy the irony of playing a game that’s eons older than they are…

HECToR is that room full of 60 cabinets to the left there. The cabinets are all linked up. Together they make one of Europe’s fastest supercomputers.

HECToR apparently has the power of 12,000 standard desktop PCs (or 250,000 if you base it on the one I’m using at the moment) and is now officially the UK’s fastest supercomputer. So as well as getting Crysis running at a really good frame rate… 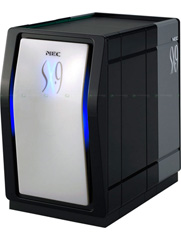 If there was anyone I’d assume would be capable of creating the world’s most powerful supercomputer, I thought it’d be Alienware or someone of similar ilk – certainly not NEC, purveyors of your average family CRT TV back in 1992.

The SX-9 beast is apparently capable of calculating 839 teraflops, or, for geeks or understand this, 839 trillion floating point operations per second. In other words, it may just be able to handle your incessant 14-tabbed browsing habits. People planning on visiting the supercomputing…