Following Google’s Chrome OS announcement yesterday, there is much speculation on the web today that Microsoft is going to make a big announcement of their own at their conference on Monday.

The rumours began after notorious tech-blogger Robert Scoble claimed via FriendFeed to have some information regarding a possible announcement to his pal Diego. “Diego, no, it’s one of Microsoft’s primary businesses,” he wrote. “Did you know Microsoft has 14 billion dollar businesses?”

Reports are now suggesting the Microsoft may be announcing a new version of Office that not only syncs via the cloud, but will work in the cloud without the need for any actual software to be installed.

If true, this would be a major attack on Google Docs. It’s interesting to note that the domain office.com has recently been sold and is currently unoccupied. I wonder…..

Be sure to visit Tech Digest on Monday where we’ll be bringing you any important news from the Microsoft’s Worldwide Partner Conference in New Orleans.

Ladies and Gentlemen, I can exclusively reveal that following Tech Digest on Twitter is officially not annoying. Using the *science* perfected by the chaps at Follow Cost, it turns out that we issue just 0.44 updates per day, though that’s slightly higher if you’re just looking at the last hundred days… 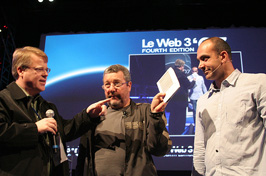 Philippe Starck is currently giving a very funny talk about design and technology. His firm belief is that we are constantly designing new things when the things we are currently using work fine. He is appalled…