an you optimise earphones to suit a certain type of music? Internet radio company Radiopaq thinks you can.

The “MP3s are a bit rubbish” spiel is almost getting as tired as the “megapixels do not a camera make” lecture but all the same it’s nice to see a gadget that’s doing its best to iron out the kinks in your crushed up music tracks. That’s the job of the Radiopaq Sound Jacket which is a rather swish, brushed metal looking add-on for the 4th gen iPod Nano.

It works as a dynamic graphics equalizer, reacting automatically to the music played from the mini-pod in order to bolster and enrich the sound in all the right places and with any luck should make them sound good. A lot of players – like the Philips GoGears – have these kind of features built-in, so you’d hope Radiopaq has got something really special going on here or I’m likely to pan the hell out of when I get to try one out for review.

There’s all sorts of graphs explaining how you get more frequencies through it and that it improves the quality of sound by 60% but it rather smells like nonsense to me. Not saying it doesn’t work, just that quantifying an audio sensory experience by numbers is utter tosh.

The jacket powers off the pod which is both good and bad. No annoying batteries or charge time but your Nano is going to go flat quicker; 12 hours listening time is what they say.

It’s yours for £69.99 as soon as they get it on the Amazon shelves and, with any luck, it’ll actually be worth it.

The radio search engine Radiopaq, which launched in beta in February, has now officially gone live today with some new services to dazzle your aural senses.

Aggregating thousands of radio stations from within the UK and abroad, it streams them through the site, all for free. Now compatible with Macs (when using Safari), it offers 35% more stations than it did back in February, with an improved layout, predictive search, personalised profiles and even weather and… 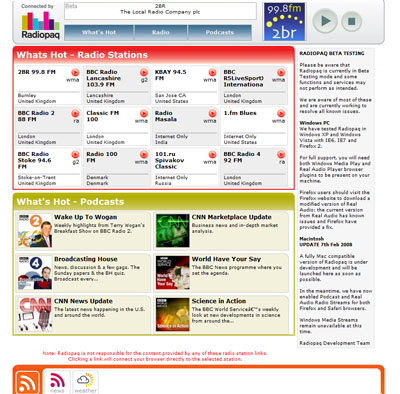 All these cool streaming Music 2.0 sites are nice, but they don’t let you listen to local radio stations in Burnley or Stoke, do they? Well, a new site called Radiopaq does. Yes, of course it’s in beta…