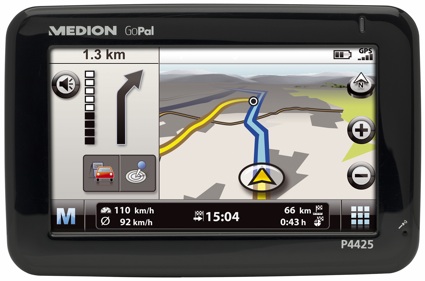 In September last year we reported on the GoPal P4425 and said that it would be coming in November priced at £299.99

It looks as if things may have been a little delayed, as Medion has announced that the unit is now available for £249.99.

It features the GoPal 4.0 navigation software, a slim (124 x 81 x 17mm) design, street level Navteq maps for the UK and Europe, up-to-date traffic information, GPS-based speed limit warnings, and FM transmitter for playing back either the voice guidance, or MP3 files, through a vehicle’s radio system.