The International Federation of the Phonographic Industry, or IFPI, is basically an international version of the RIAA and BPI, who claim to act as a trade body for record labels, but seem to only exist in reality to head up the music industry’s anti-piracy campaign. True to that role, last night it released a statement claiming that 95% of music downloads in 2008 were illegal.

However, there’s some bright news for the labels hidden in there too – download sales are up 25% on last year, and now make up a fifth of all recorded music sales. The IFPI reckons that it’s worth £2.5 billion.

If you’re a NIN fan, then you’ve just been handed a massive, if a little belated, Christmas present. Trent Reznor, known for his liberal approach to his intellectual property, has released 400GB of raw, unedited HD video footage shot at three recent shows in Victoria, Portland and Sacremento. 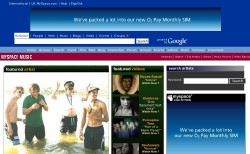 Let’s get one thing straight. The internet isn’t killing music, any more than home taping did back in the 1980s. Yes, CD sales are on the slide. Yes, people are still using peer-to-peer download services to trouser free music, despite the threat of legal action from the music industry. And yes, it’s possible that a whole generation of teenagers now believe music isn’t something you pay for.