Step down 1&1, you no longer have the coolest datacentre. That honour now belongs to Bahnhof, at their Pionen datacentre, buried deep in the bedrock below Stockholm in a former nuclear bunker. I don’t know where to start – it uses submarine engines! It has waterfalls! There’s 1,500,000 Watts of cooling! It can withstand a hit from a nuclear missle!

Click the image below to check it out, before my head explodes from the awesomeness.

(via, and more pictures and info at, Royal Pingdom) 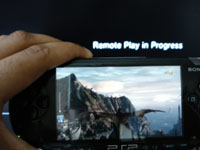 As if any game needed more to recommend it than the phrase ‘involves bluddy great big dragons flapping about all over the place’. I’m sold on Lair right there. But Sony’s upcoming PS3 title just got another unique (for now) selling point.

Highlight of the Stuff show was the three PlayStation 3 consoles lined up for demonstration, with hordes of visitors clustered around them. And pick of the three games on display was Lair, not least because it was being shown in…