Zombies and superheroes hit Apple's App Store this week in a number of apps. As you await the inevitable apocalypse that this will cause, why not have a butchers at all the other stuff hitting the app store this week,…

The headline acts for the third annual Apple iTunes Live festival has been announced. Oasis, Flo Rida, Kasabian, Paolo Nutini, Snow Patrol and The Saturdays will be among the folk rock/popping it out at the Roundhouse in Camden throughout the month of July.

Now, you can’t buy tickets to the event. You have to join the iTunes Festival Facebook group and jump through a series of hoops until you win yourself access. If you’re not lucky enough to be chosen to see the some of the 62 bands on one of the 31 nights, then don’t worry. Apple will sell you the experience at the iTunes Store in all 22 countries that it operates because each and every performance will be recorded. Thanks, Uncle Steve! 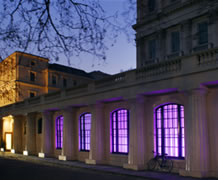 There are, by my estimation, about 876 music festivals happening in the UK this summer. Actually, make that 877. Apple has just announced the iTunes Festival, comprising a series of gigs at London’s ICA venue with 60 acts including Amy Winehouse, Crowded House, Editors and Mika.