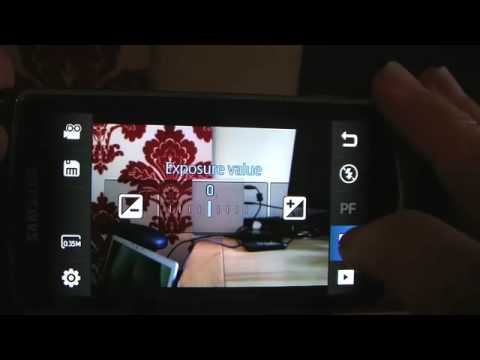 Anna takes a look the Samsung i8910 HD, previously named the Omnia HD, which we gave you a sneak peak at last month:

Anna was clearly impressed by the camera and not without good reason. HD video recording at 720p (24fps) is a world’s first for a smartphone. We’ve seen examples of HD footage from this phone on a big screen and, we have to say, it looked good.

The photo aspect of the camera is fairly decent as well – 8-megapixels with auto-focus, face detection, smile sensor and blink detection.

Connectivity is via 3G (HSDPA) or Wi-Fi and it operates on S60 so you’ll be able to load it up with Symbian apps if you wish.

The media capabilities are also very impressive. HD playback is possible via the huge 3.7-inch AMOLED screen – yes, 3.7-inches is huge for a phone screen. It plays a massive range of media formats as well: AVI (DiVX/XviD), WMV, RV, MP4, 3GP, MP3, WMA, WAV, RA, AAC and M4A. It also has a 3.5mm headphone jack which is always welcome.

So, overall this is a pretty good effort from Samsung – although the hefty price tag, as described by Anna, may be enough for customers to shun this phone in favour of many of its illustrious rivals.

Get one from Orange if you want to. If not, well, no biggie.

Strange names for products can sometimes work – just look at the Wii. Even so, the Samsung Acme, which info has just leaked about, is a little too close to ‘acne’ for my liking. It’s heavily based on the Omnia, and actually looks to be a pretty decent upgrade to Samsung’s cameraphone.

It boasts an 8-megapixel sensor, GPS, HDMI, Wi-Fi, and a 3.5mm headphone socket. It’ll do HD recording, and it’s DNLA and DivX compatible. There’ll be 8GB and 16GB versions available, and because it’s got a massive touchscreen, it’ll invariably be referred to as an “iPhone Killer” at some point in its life. Sigh. No word on release date or pricing. Yet.