Polaroid has introduced the newest, tiniest member to its family. At just 10.5 cm long, 8.4 cm wide, and 6.1 cm tall, it claims the Polaroid Go is the smallest analogue instant camera in the world. It was designed as a wearable creative companion, with a miniature version of the classic, square format film to…
20th April 202112th September 2022 Chris Price Photography

A former world champion player of strategy game Go has retired because artificial intelligence “cannot be defeated”. In 2016, Lee Sedol lost a best-of-five series against AI software created by Google firm DeepMind. The South Korean is an 18-time world champion and considered one of the greatest Go players of the modern age – but…
28th November 201928th November 2019 Chris Price Artificial Intelligence, News

This morning we got some details on the the Sony PSP2, which they now seem to be calling the “PSP Go!”. I thought it’d be interesting to compare and contrast it with the Nintendo DSi, which is by far Sony’s greatest competition in the handheld market.

Sony’s completely dumping the UMD format, after it’s been such a massive flop. The new PSP will instead have plenty of storage onboard – 16GB or 8GB, and let you download content to the device over the air.

The DSi still relies on cartridges, though I suspect that’s for backwards compatibility more than anything else. The latest version of the handheld lets you download content over-the-air as well, and you can store the content on an SD card upto 16GB.

For the PSP Go! there’ll be 100 titles available at launch, including Gran Turismo. Any games you own for your PSP won’t work, as the UMD format won’t be supported. All DS games are still compatible with the DSi, though there’s far fewer titles available in Nintendo’s download store.

While the DSi’s much touted touchscreen has proved a bit of a headache for some games developers, others have used it fantastically. There’s no word yet on whether the PSP Go! will have a touchscreen but it will have an analog stick, a feature sadly missing from Ninty’s handheld.

We don’t know how big the PSP Go! will be, yet, but I wouldn’t be surprised if it’s rather more compact than the rather chunky original PSP. What we do know is that the slide-out screen will definitely be present.

The DSi, on the other hand, is a svelte 137mm x 74.9mm x 18.9mm and 214g. It folds in half like a book, and can easily be slipped into a coat pocket. Portability is obviously an important factor for these devices.

The DSi came out on April 3rd 2009 in Europe, and in November 2008 in Japan. The PSP Go! won’t be out until the last quarter of 2009, i.e. not before October. It’ll be shown off at E3 in June, though, so we should get some pictures of it soon that we can use in place of all the concept art that we’ve been employing up till now.

The most important things for Sony to get right are the look of the thing, and the game catalogue available. It’d be a good move for them to implement a system where you can get your old games on download when the PSP Go! is released, otherwise I think there’ll be a certain amount of consumer backlash.

As for me, though, I’m sticking with my DS Lite. I don’t feel the push, just yet, to switch to downloadable games – particularly as backing them up seems to be an issue. When the next generation of devices comes round, I’ll be ready.

When they’re not playing the perfect game of draughts or proving they can solve the Rubik’s Cube more efficiently than you, I’ve heard that supercomputers like nothing better than a salubrious game of “Go”.

As much as anything, they enjoy the irony of playing a game that’s eons older than they are…

TomTom has announced that five of its GO x30 Series portable navigation units are now available to buy in the UK. 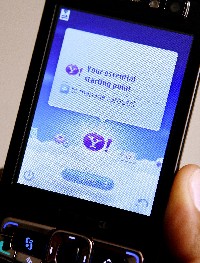 We’ve written about Yahoo’s Go for Mobile application numerous times since it first launched, but today sees an all-new version unveiled at CES. Go 3.0, as it’s called, is in “early beta”, so it’s basically a chance to see how it’ll evolve in the coming months, although US mobile users can download it now.

Yahoo has launched a beta version of Yahoo Go for Mobile 2.0, the second-generation version of its flagship mobile application. Although only available on 70 phones at launch, more will be on the way – and for the first time,…