Nearly half of global ransomware attacks targeted US in 2021

An affordable gaming laptop that promises "unprecedented performance", can Gigabyte's P2742-G punch above its weight when it comes to running the top PC games? Read our full review to find out.

The Computex show rolls on, bringing many PC-shaped delights to those lucky enough to attend the Taipei expo. Gigabyte just previewed its M912 laptop-cum-tablet PC which will now be added to the mental list of ‘Eee PC bandwagon jumpers’.

An 8.9-inch screen puts it in direct competition with the Eee 900 and countless others, yet it’s got something clever up its USB port – a rotating 180 degree function which turns it into a tablet.

Internally, Gigabyte has packed in a 2.5-inch S-ATA hard disk with storage capacity of up to 250GB, and up to 4GB SSD if you choose. A 1.3-megapixel webcam and Windows or Linux OS finish…

Taiwan-based Gigabyte has been kicking about for some time, but without much of a UK profile, Shame really, when it’s releasing smart kit like the GSmart MS808 handset. 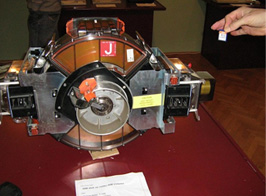 Don’t bother checking your washing machine in the kitchen, there, I haven’t stolen the insides, don’t worry! The only crime which has been committed here is dredging up the one gigabyte’s past life, back when she was a plus-sized model trying to make it in the world, before she slimmed down to the size-zero SD card we know so well.

The IBM hard drive above is 22 years old, and weighs around 70lbs. Quite a remarkable difference 20 years can make,…