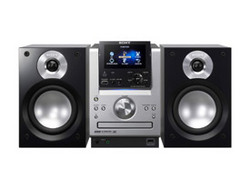 Sony will probably never forgive me for describing their new GIGA JUKE as an iPod Hi-Fi, but since HDD means basically nothing to normal folk, it seemed like the easiest way to explain what it is. Two models have been announced Sony NAS-50HDE, also known as the GIGA JUKE HDD System and the NAC-HD1E GIGA JUKE HDD. or GIGA JUKE HDD Deck. The System model can store up to 40,000 tracks on its 80GB hard drive, while the Deck, which is as a standalone system to connect to your current hi-fi has a 250GB hard disk drive capable of storing up to 375 hours of music.