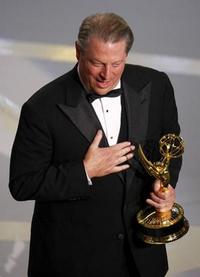 It’s the morning after the Emmy Awards, with Ricky Gervais scooping Best Comedy Actor, and Dame Helen Mirren waltzing off with Best Actress Who Was In The Queen And Also Some TV Show. But Al Gore will also be feeling chuffed this morning, after his Current TV cable network grabbed the Interactive Television Services Emmy.