Tech Digest daily round up: Apple launches ‘no longer a spectacle’

The competition is certainly hotting up. The mysterious Vince won last week’s challenge with a mighty 13,728,350 score, obliterating the second place score of 34,170 from Neil. Vince says he played for an entire semester to get that good. That or he’s making up numbers. We’ll never know.

This week, we’ve got Perfect Balance. It’s less reliant on having a good mouse, you’ll be pleased to hear. It’s more of a puzzler, involving the stacking of blocks so that they don’t fall. I managed a score of 16091, on level 18, before getting stuck. How far can you get? Entries in the comments below, please.

Last week’s cricketastic Flash Game Challenge was won by commenter Alan, who hit my score for six with a mighty 127 runs. A polite round of applause for him, please, ladies and gentlemen.

As for this week, well, today is supposed to be the most depressing day of the year, so I wanted to pick something to warm your cold little hearts. How about helping some deer cross a forest stream, with rays of light cascading all around? On my first go, I scored a pathetic 9750. The second time, I scored a far more respectable 4991950. Can you beat it? Entries, as ever, in the comments.

The making of Fiddy’s computer game hasn’t been without difficulty, but after two years, it’s finally due for a release in January. Still, the delay means one thing – the man himself has had a chance to get good at it:

“I actually had the opportunity to play it, and I’m pretty good at it. If anybody out there wants to create a challenge or wants to bet some money online, we could play the game right now.”

It’ll have 19 new, exclusive, tracks, as well as a bunch of Fiddy’s older stuff, including the big hits. Oh, and bizarrely, it’s apparently inspired by Leonardo DiCaprio’s 2006 film “Blood Diamond”. Still, I bet I could kick his arse at it, without too much trouble. You’re on, Fiddy.

This is brilliant. Why has no-one come up with the concept of downhill bowling before? Fling a bowling ball down a hill and see how many strikes you can get on the pins scattered about the hillside on the way down. Plus there’s bombs!

Install the Unity Web Player (It’s not virus, spyware, etc), and then restart your browser and give it a quick go. I had difficulties running it in Chrome, but after swapping to Firefox, I notched up a whopping score of 7180 on level one. Beat that, and leave your score in the comments for someone else to top. 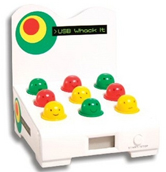 This USB desktop version of the ancient What It game is probably intended as a fun way to pass the time away whilst at your desk, but for me, I’m envisioning taking out my rage at pages not loading fast enough and my favourite blogs not being updated enough, BOP! BOP! BOP! TAKE THAT! POW!

I can feel the rage seeping away already. The aim of the game is dead-easy, you just have to whack the coloured ‘moles’ (or Jelly Baby heads, as I call them) on the head as they light up, with the pace of the game progressing faster and faster in either a 30 or 60 second limit. Powered…