Telehouse is a company based in London’s Docklands that runs massive datacentres providing servers and other network gear to major companies.

It’s building a new one – Telehouse West – that’s costing $180 million, but the carbon footprint for such a facility is absolutely massive. Tonnes of heat is generated and the cooling systems involved have to work extremely hard. The company realized that the heat could be reappropriated for use in local homes.

As a result, the company’s been able to generate up to nine megawatts of power for local homes – the equivalent of boiling 3,000 kettles continuously. It’s the first major UK datacentre to implement such a strategy, and the first datacentre to gain planning permission in London since strict sustainability rules were introduced. 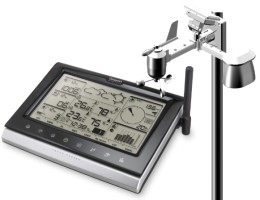 Oregon Scientific – the people responsible for making me look like a geographical moron – are at CES to launch a clutch of new products, including some weather monitors that are perfect for weather-obsessed Brits (go on, you know you love talking about the rain). Right now we only have US prices, but we’ll keep you updated on UK releases…