Here’s a no-brainer for you with them both stuck next to each other on the BBC News page. On the one hand, iPlayer is going HD today. On the other, we’re going to see Adobe Flash chips in TV sets and set-top boxes.

Now seeing as iPlayer, and YouTube for that matter, are both Flash based, it looks as if live broadcast TV is taking another step towards an ultimate demise. The issue before, as far as I’m concerned was that the likes of iPlayer and the Tube were too hideously pixelated and rubbish to ever watch on the big screen but in full resolution, there’ll be nothing left to stop them.

So far, they’ll be no Adobe love for the likes of Sony and Samsung but we should be looking at 420 million bits and pieces of hardware as made by Broadcom, Intel, NXP and STMicroelectronics within the next three years. Worth having a little think before you buy AV. 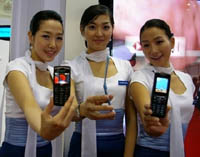 Broadcom’s new technology will kick mobile camera and video abilities through the roof, providing it isn’t lying about the technology packed into its next-gen BCM2727 mobile media chip.

We have no reason to think a company like Broadcom would lie.