Both “boobs” and “booty” have been banned from being used in marketing text for an application called “Wobble”, which allows users to add ‘wobble points’, around which any picture they like will wobble. If that confused you, check the promotional video for the app, but be warned, it’s probably mildly NSFW.

Back in December, an application called iBoobs was banned from the App store, and now ‘Wobble’ is under threat too. When the developer complained about the censorship, Apple told him “Wobble and Apple had an agreement that we needed to comply with”.

Related posts: Apple still not down with the “netbook” scene – insists software is more important than hardware | Apple releases the chains on iTunes DRM 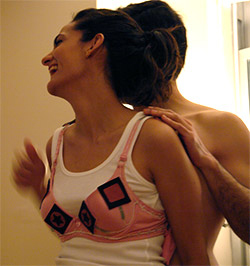 For those that think gaming involves sitting alone on a couch, twiddling your thumbs, think again.

Recently a New York University student, Jennifer Chowdhury, created her thesis ‘Intimate Controllers’ on the subject of intimate controlling devices, where she invented a form of playing Pong with her boobs whilst her partner played with his bottom. Gaming beginning to sound fun, yet?

According to Wired, she embedded a set of sensors in her bra which controlled the actions of the game, so when her partner touched her left boob, the Pong paddle moved to the left, and the right boob would control the right paddle etc… 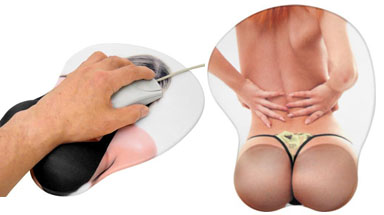 A silly one to start the day off with, I can imagine these mouse-pads which have real silicone implants attached to the jubblie or bum bits would go down a treat for a gag-gift for a workmate. Probably in Zoo, Nuts, or Loaded magazine’s offices. Certainly not in our Shiny Towers, where most of us are women and most of my colleagues…