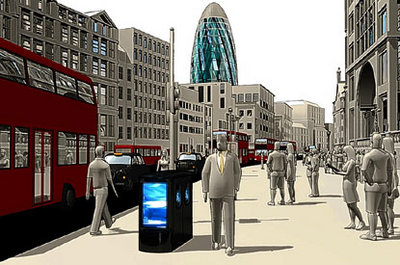 Since the IRA’s bomb attacks in the 80s, there have been remarkably few bins around railway and tube stations in the UK – the fear being that terrorists might stick a bomb in one. Well, now bins are back. A company called Media Metrica has designed BIN 2.0. It’s bombproof, has recycling sections, and feature screens with news, travel, and weather info on them.

It’s been tested in the New Mexico desert over the past five years, and costs £15,000 to produce and £3,000 to install. It’s hoped that costs will be recouped by local businesses sponsoring a bin. In the event of an attack, the bins can be changed to display emergency information, directing people away from danger areas.