According to the data presented by the Atlas VPN team, cybercriminals launched nearly 5.4 million Distributed Denial of Service (DDoS) attacks in the first half of 2021 — an 11% increase compared to the first half of 2020.
More than half (2.8 million) of the attacks utilized compromised computer systems, or in other words, botnet networks, as sources of attack traffic.
A Distributed Denial of Service (DDoS) is a common cyberattack with a goal to make an online service unavailable by overwhelming it with a flood of internet traffic. To perform a DDoS attack, hackers infect multiple devices, turn them into bots and direct them to a targeted IP address. The targeted website or service can no longer accept valid requests from actual visitors as it gets flooded with heavy traffic coming from fraudulent requests.
Cybersecurity writer and researcher at Atlas VPN Ruth Cizynski shares her thoughts on DDoS attack trends:
“The growing number of insecure internet devices from smartphones to smart fridges means DDoS attacks are easier to carry out than ever before. If necessary precautions are not taken a service disruption caused by a DDoS assault can cost a company its revenue and harm its brand.”
DDoS attacks were highly prevalent across the world in the first half of the year. However, some regions were more affected than others.
Europe, the Middle East, and Africa (EMEA) got the biggest share of DDoS attacks. A little over 2 million attacks were aimed at individuals and organizations in the regions, with an average duration of 47 minutes per attack (a global average is 50 minutes per attack).
Other affected regions include North America with 1.3 million attacks, Asia-Pacific with 1.2 million attacks, and Latin America with 555,039 DDoS attacks in H1 2021.
To read the full article, head over to:
https://atlasvpn.com/blog/a-record-5-4-million-ddos-attacks-were-reported-in-h1-2021 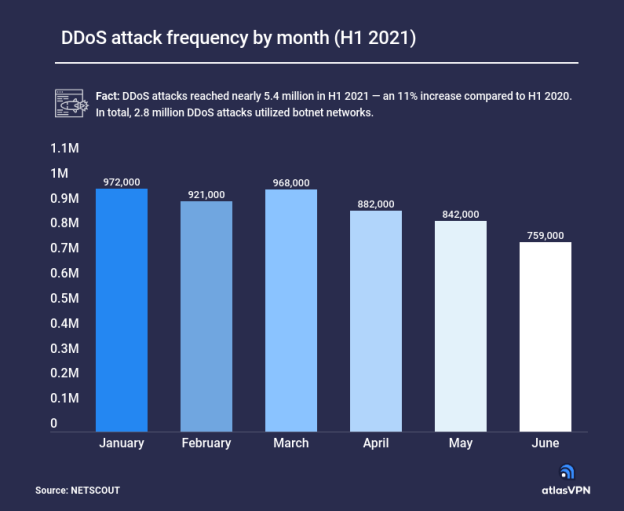