Spyware is a collection of tools (apps or software programs) that enable someone else (such as an abuser) to track and record your phone activity. This implies that the fraudster can collect all of the sensitive information you type on your phone, such as login passwords for your email address, banking apps, or even personal identifying information such as Social Security numbers, home addresses, and so on.

AV-Test, an independent research institute running for more than 15 years, ran a test on the most popular security applications to see which ones perform the best in terms of spyware detections on Android devices. Each security application had to detect 29 unique stalkerware threats. The analysis was carried out in July 2021. Shockingly, by far, the worst results were from the native Google Play Protect application, as it only detected 9 threats out of 29, which constitutes a success rate of 31%.

Given that the software is free and comes pre-installed on all Android smartphones, one could argue that it is still a good result. However, several of the programs assessed are also free. Bitdefender, Trend Micro, ESET, and Kaspersky, among the strongest performers, require a minimal licensing price, usually approximately $10 per year for one device.

NortonLifeLock Norton 360 security software had the second-worst result. Only 17 out of 29 spyware programs were detected, giving it a detection rate of 58.6%.

Edward Garb, a cybersecurity researcher at Atlas VPN, comments on the recent findings:

“The results show that when it comes to virus protection, a well-known brand name isn’t always the best option. The most widely used antivirus program fared the worst in this situation.

Android users who rely on Google Play Protect to defend themselves against spyware should consider upgrading to one of the more powerful antivirus apps.”

To read the full article go to:
https://atlasvpn.com/blog/google-play-protect-detects-only-31-of-android-stalkerware 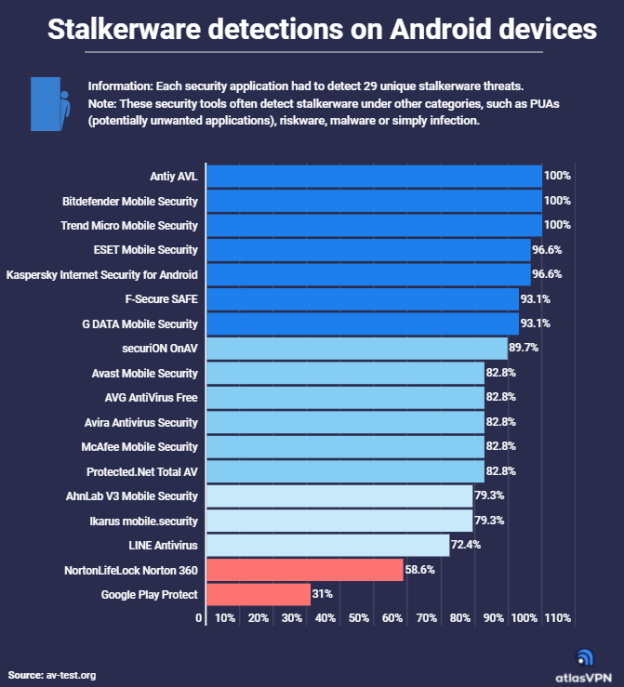