According to the recent Atlas VPN team findings, nearly 3.3 billion internet users (or 41% of the population) now use Google Chrome, making it by far the most popular internet browser.

The second most popular browser is Safari, with a total of 944,576,100 internet users. iPhone or Mac device users mostly work with the Safari browser as Apple developed it.

Third on the list is the Firefox browser, with 181,435,430 people actively using it. Unlike other browsers, Firefox has placed a huge emphasis on user privacy.

Cybersecurity writer and researcher at Atlas VPN Anton Petrov shares his advice on how to keep your browsers secure and private:

“Browsers collect cookies, cache, and store your passwords, which could put your data in danger if the browser gets hacked. To avoid that, clear your browsing history and cache from time to time, and use software such as VPNs or password managers for an added layer of security”

At this time, when cybercrime is more active than ever, safety should be one of the priorities when choosing a browser (and even when people send faxes from emails).

Even though Chrome is the most popular browser globally, it has a history of security and privacy issues. Last year in March, hackers found a backdoor in a Google Chrome update and took advantage of it by releasing a fake Chrome update with malware.

VPNs, antivirus, and other similar applications have become essential tools when it comes to online security.

To read the full article, head over to: https://atlasvpn.com/blog/more-than-3-billion-internet-users-now-use-the-google-chrome-browser 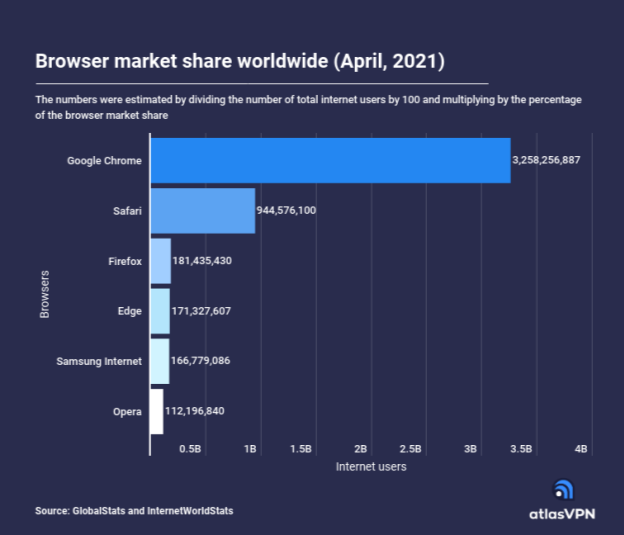