Lack of cybersecurity in the work-from-home environment has made people more vulnerable to receiving fraudulent phishing emails or being directed to deceiving websites.

According to the data presented by the Atlas VPN team, in the past 12 months 83% of UK businesses experienced phishing attacks — an 11% rise in the past four years.

Other significant types of attacks come from criminals impersonating well-known organizations via emails or websites. In total, 27% of businesses have suffered from such attacks.

According to cybersecurity writer and researcher at Atlas VPN Anton Petrov:

“Anti-malware tools are becoming more effective and more widely adopted, forcing cybercriminals to search for different techniques to acquire sensitive information, such as phishing attempts. Malicious actors took advantage of the fear of the global pandemic and work-from-home situation to launch phishing attacks at an accelerated rate.”

Not only a considerable amount of businesses but also 79% of charities have reported phishing attacks. Almost one-quarter of charities received impersonation of organizations emails. Charities were also more susceptible to virus or malware attacks compared to businesses.

Half of the organizations not taken measures to identify cyber-risks

As cyber-attacks began increasing in the past few years, some organizations started taking action to identify and minimize cyber risks. However, such practices are still not as widely used as they should be.

Out of all surveyed organizations, around half (52%) have established at least one cybersecurity measure in the last 12 months. However, this means that the other half has not taken any action to evaluate their cybersecurity.

To read the full article, go to: https://atlasvpn.com/blog/83-of-uk-businesses-face-phishing-attacks-as-threats-penetration-looms 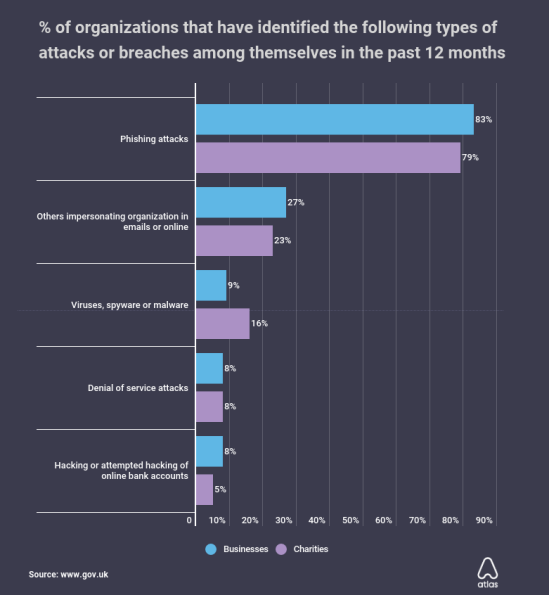