Prices of top-end mobile phones have risen 490% since 2000 and now cost more than half the average monthly wage, according to price comparison website Uswitch.com.

The data is revealed as Samsung prepares to launch its Galaxy Note 20 Ultra on 5th August at the predicted cost of £1,300. The phone is set to join the Apple iPhone 11 Pro Max – pictured above – as one of the most expensive handsets ever.

Analysis of price rises, corrected for inflation, suggests that top-of-the-line smartphones could hit £1,800 within five years, with costs currently doubling every ten years, according to the Uswitch.com analysis.

Modern smartphones can browse the internet, take photographs and videos, stream films and television, and download thousands of apps – but prices have risen with the extra functions. The average handset now costs £355, 14% of the average UK monthly salary.

There is huge variety across the market, with budget ‘dumbphones’ like the Alcatel 10.66 on sale for £5. The Apple iPhone 11 Pro Max cost £1,149 at launch, but manufacturers also offer stripped-down versions of their top-end devices for reduced prices. The 2020 iPhone SE costs £419.

Handset prices in the early 1990s, when mobiles phones were an expensive luxury, were higher than they are now. The Motorola 3200 — the company’s first portable phone launched in 1992 — cost £762, equal to £1,651 when adjusted for inflation.

Prices came down as mobile phones spread to the mass market, with costs falling as devices got smaller. After 2000, prices started rising again as screens grew to let users browse the web more comfortably on internet-enabled devices.

At the same time, consumers are also keeping their handsets longer, using them for two years and 3.7 months on average at present, up from one year 11.4 months in 2016. 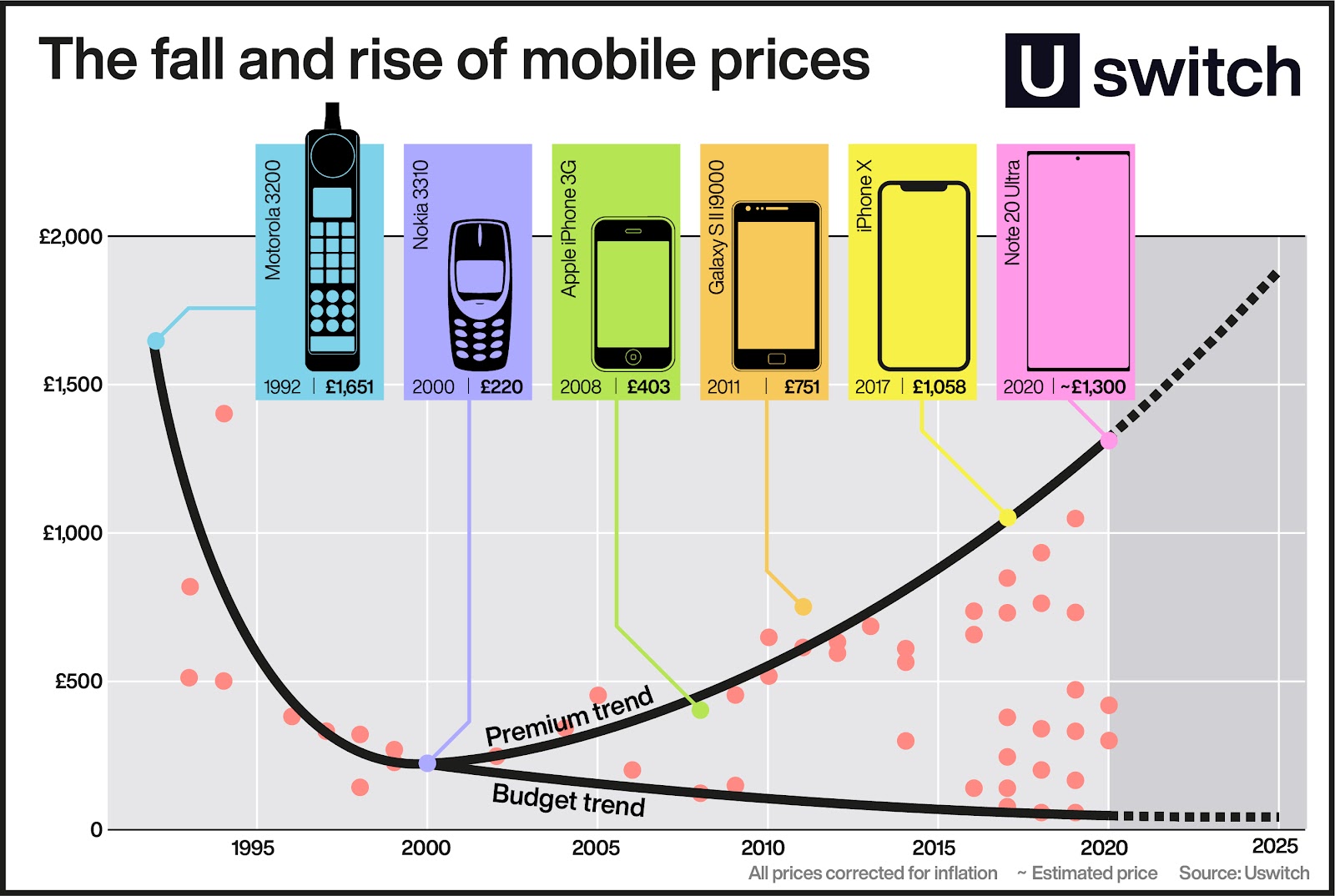 “Mobile phones these days do the job of a camera, music player, television and computer, but you certainly pay the price for having all that tech in your pocket.

“Premium smartphones broke through the £1,000 barrier a while ago, and there’s no sign of the prices coming back down.

“We pay for our smartphones in manageable monthly payments, so it’s easy to forget how much we’re spending on these technological works of art.

“Although top-end handsets are soaring in price, there are models on the market to suit every budget, with the Samsung Galaxy A10 costing just £139, and the iPhone SE offering great value at £419.

“When you’re looking for a new handset, take the time to compare the features of the phones on offer, find what’s right for you, and make sure that you can afford the monthly payments.”