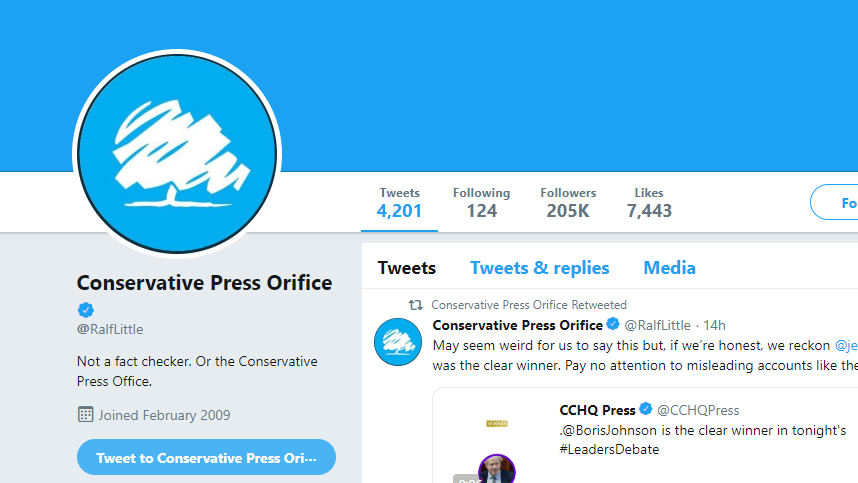 Actor Ralf Little said he has been suspended from Twitter after changing his account to mimic the Conservative Party press office.

The Tories came under fire for rebranding one of their official Twitter accounts as a “fact-checking service” during Tuesday night’s televised election debate.

Twitter warned that a repeat of the incident would result in “decisive corrective action”.

However, by Wednesday morning a number of celebrities re-branded their verified accounts.

Royle Family actor Ralf Little changed his name to “Conservative Party Press Orifice” and the description to “Not a fact checker. Or the Conservative Press Office”.

He told LBC’s James O’Brien: “Just been logged out of my Twitter account without explanation. Assume I’ve been suspended. Which is fine. But only if the @CCHQPress account is suspended for the same thing. Please continue to press the issue with Twitter in my absence.”

He was not the only verified celebrity to rebrand his account.

Black Mirror creator Charlie Brooker changed his account to mimic factcheckUK, as did The Thick Of It and Veep creator Armando Iannucci.

The Electoral Commission – the official elections watchdog – issued a warning following the incident, saying voters were entitled to expect “transparency and integrity” from campaigners.

However, senior party figures brushed off the controversy, saying it was part of their “instant rebuttal” mechanism to challenge “nonsense” claims made during the debate.

In a statement, Twitter said: “Twitter is committed to facilitating healthy debate throughout the UK General Election.

“We have global rules in place that prohibit behaviour that can mislead people, including those with verified accounts.

“Any further attempts to mislead people by editing verified profile information – in a manner seen during the UK election debate – will result in decisive corrective action.”