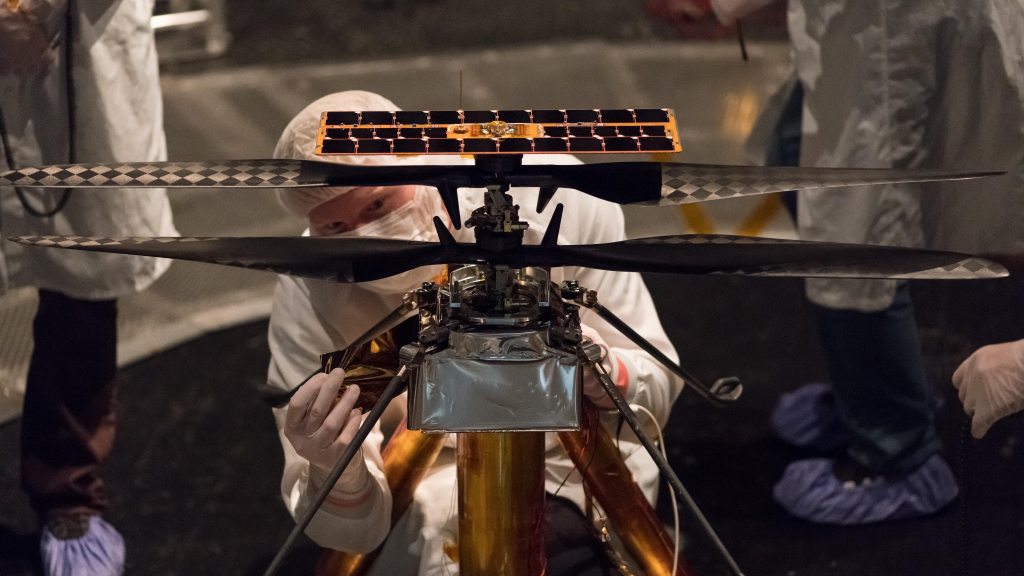 A helicopter that is set to fly on Mars in 2021 has completed its first test flight, American space agency NASA has revealed.

Exploration on other planets has long been restricted to rovers on the ground, but engineers are making progress in their ambitious plans to launch a drone-like device into the skies above the Red Planet for the first time, which they hope will reveal a new perspective on the Martian surface.

Remotely controlling a helicopter from hundreds of millions of miles away, on top of Mars’s thin atmosphere and freezing temperatures as low as minus 90C (minus 130F) at night, make flying such a device an incredibly difficult technical feat.

The space agency has been putting the 4lb (1.8kg) helicopter through its paces in a vacuum chamber at its Jet Propulsion Laboratory in Pasadena, California, which swaps nitrogen, oxygen and other gases for carbon dioxide to mimic the atmosphere of the Red Planet, as well as a gravity offload system.

“Getting our helicopter into an extremely thin atmosphere is only part of the challenge,” said Teddy Tzanetos, test conductor for the Mars Helicopter.

“To truly simulate flying on Mars we have to take away two-thirds of Earth’s gravity, because Mars’s gravity is that much weaker.”

NASA is aiming to launch the helicopter with the Mars 2020 rover in July 2020, before it is expected to reach the planet in February 2021 and carry out flights a few months later.

“The next time we fly, we fly on Mars,” said MiMi Aung, project manager for the Mars Helicopter.

“Watching our helicopter go through its paces in the chamber, I couldn’t help but think about the historic vehicles that have been in there in the past.

“The chamber hosted missions from the Ranger Moon probes to the Voyagers to Cassini, and every Mars rover ever flown. To see our helicopter in there reminded me we are on our way to making a little chunk of space history as well.”

The news comes days after US Vice President Mike Pence told NASA that he wants astronauts on the Moon again within five years, which he said “holds great scientific, economic and strategic value”.