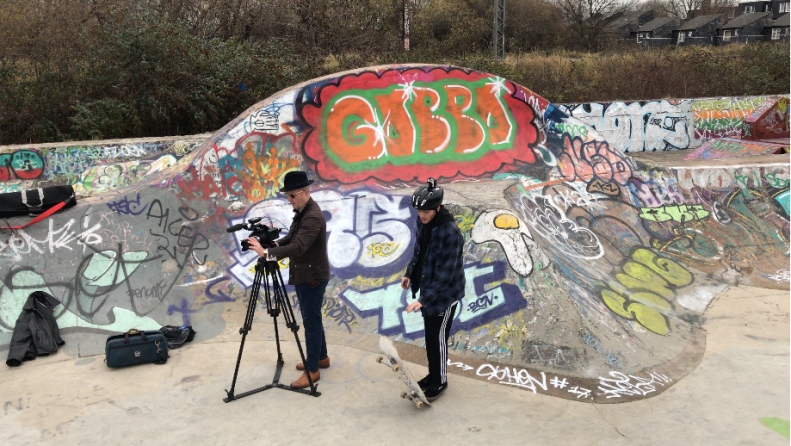 Last week before the snow set in we travelled over to a lovely skate park in Tottenham’s Markfield Park (formerly a sewage works) to film our latest 360 video in association with Kodak PixPro. And despite a few problems with the locals who didn’t take kindly to our camera man setting up his gear in the centre of their beautiful, graffiti covered park – or in fact anyone coming over to skate who they hadn’t seen before – I think we produced some great content!

As usual we’ve filmed in two versions. One where you can see our skater, Frankie, wearing the PixPro as he attempts various manoeuvres around the complex, weaving course. The other using entirely 4K footage taken from the actual Kodak PixPro which, after a long debate, we decided to attach to the top of Frankie’s helmet for complete 360 views.

Although we thought about a shoulder and a chest strap, the problem is you can’t get a complete 360 view. Instead you only get what’s in front of you. Of course the problem with mounting on the top of a helmet is that you don’t quite get the same feeling of movement you do if the camera is mounted a bit lower, but we felt that’s a small price to pay for the experience of being able to look all around. Plus as it this a pretty steep skateboarding course you really do get some great shots of Frankie performing his tricks.

Thankfully the Kodak PixPro comes with its own mount (similar to the one used by the GoPro) as well as adhesive strips so it’s very easy to attach to a cycling helmet for some great action shots (BMX biking would’ve worked pretty well too – and they do that here too). With the PixPro you can film for a little over 9 minutes at a time in full 4K so for this video we took footage from several different clips and edited them together.

The PixPro comes with its own software which you can download here. This can be used for directly uploading to YouTube or Facebook. Alternatively you can edit the footage in another package and inject metadata (YouTube recommends Spatial Media Metadata Injector). You can see YouTube’s tips on how to upload 360 video here.

You can see the ‘2D’ version of Frankie skating below…

You can see all of the videos shot with the Kodak PixPro camera here.

For more information about the PixPro go to //shoppixpro.com/?cPath=27