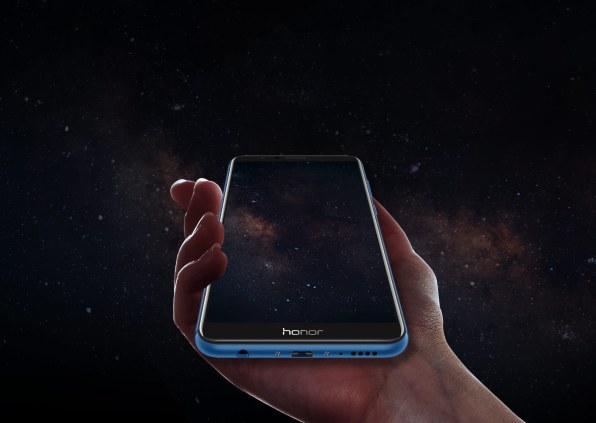 Huawei sub-brand Honor launched two new smartphones at an event hosted by the company’s President George Zhao, and attended by Tech Digest, in the city of London today.

Already available in China where it has shipped two million units, the Honor 7X boasts a 16 MP dual lens rear camera as well as an 8MB front camera. Various picture effects are on board including a gender beauty mode and a funny effects similar to the filters on Snapchat (for giving people bunny ears etc.)

There’s also a gesture trigger option so you can take selfies simply by waving your hand in front of the camera.

Featuring a 5.93 inch 18:9 inch shaped screen, the Honor 7X offers a 12.5 per cent wider view than standard smartphones, making it particularly suitable for gamers and for split screen activities such as watching a movie and sending/receiving What’s App/text messages.

Slimmer than the iPhone 8 Plus by 2.7mm,  the Honor 7X incorporates a 3340 mAh battery which Honor claims can last 22 days in standby mode and 12 hours in video playback mode. On board is the Kirin 659 processor, 4GB RAM and 64GB storage (expandable to 256GB).

Billed as the world’s first AI (Artificial Intelligence) smartphone, the Honor V10 boasts a 5.99 inch screen and also has an 18:9 shaped display, giving a wider view.

Unusually it features both a fingerprint sensor on the front of the camera embedded into the glass as well as boasting facial recognition features similar to those on the latest generation Apple iPhone models.

Launched in 2013, Chinese company Honor is Finland’s number one brand and number 3 in Russia behind Apple and Samsung.  Approximately 85 per cent of Honor sales are currently in China, but by 2022 it expects 60 per cent of its sales to be outside of China.

Aimed at ‘young people and those who are young at heart’ according to President George Zhao, Honor also has several experiential stores in France, Spain, Italy, India and Russia ‘where young people can come together’.