By now you’re probably sick to death of hearing about Apple’s latest 10th anniversary smartphone, the iPhone X, like it’s the saviour of the world or something.

But just in case you’ve been living under a rock or can’t be bothered wading through all the coverage, here’s a quick cheat guide so you can at least join in with the conversation down the pub.

II. It has facial recognition rather than Touch ID. Apple calls this FaceID. It is a 3D system that they say cannot be fooled by a 2D photo. Apple claims that while there is a one-in-50,000 chance that TouchID can be unlocked by a random stranger, the odds rise to one-in-one-million with FaceID.

IV. It is the first iPhone to incorporate OLED technology (although this has been available on models from rivals such as Samsung for some time). Unlike conventional LCD panels, the pixels on an OLED screen produce their own light, meaning better blacks and an improved dynamic colour range

V. Because it doesn’t have a home button you will have to learn to swipe up to access its apps, and to press a side button to summon voice assistant Siri.

VI. It incorporates QI wireless charging technology (this is is also available on the newly launched iPhone 8). This means you will be able to use widely available charging pads to charge your iPhone rather than having to plug it into the wall etc.

VII. And talking of charging, battery life is apparently two hours longer than the iPhone 7, due in part to part to the inclusion of a power-saving OLED display. However, we’ll believe it when we see it.

VIII. Cameras are improved. The rear-facing cameras are 12 MP and better than on the iPhone 7 Plus. The flash is also improved while improved sensors help operation in low light. 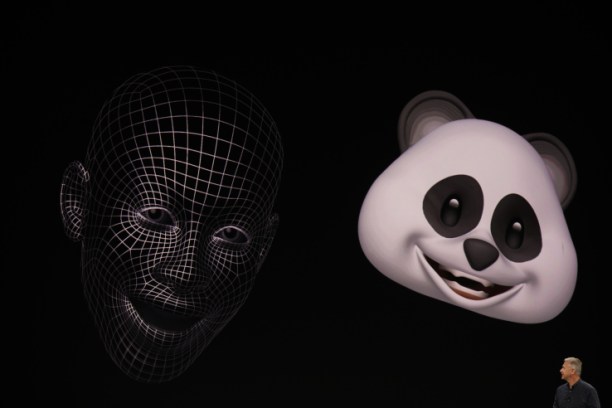 IX. The iPhone X comes with a feature called Animoji, emojis which are animated based on your facial expression. Not sure about that one but maybe kids with a spare £1000 to spare on an iPhone X will enjoy it! See image above.

X. The iPhone X coincides with the release of iOS 11 – Apple’s latest operating system – which will see the introduction of Augmented Reality apps such as this one here.

You can see more information here and find the specs on the Apple website.