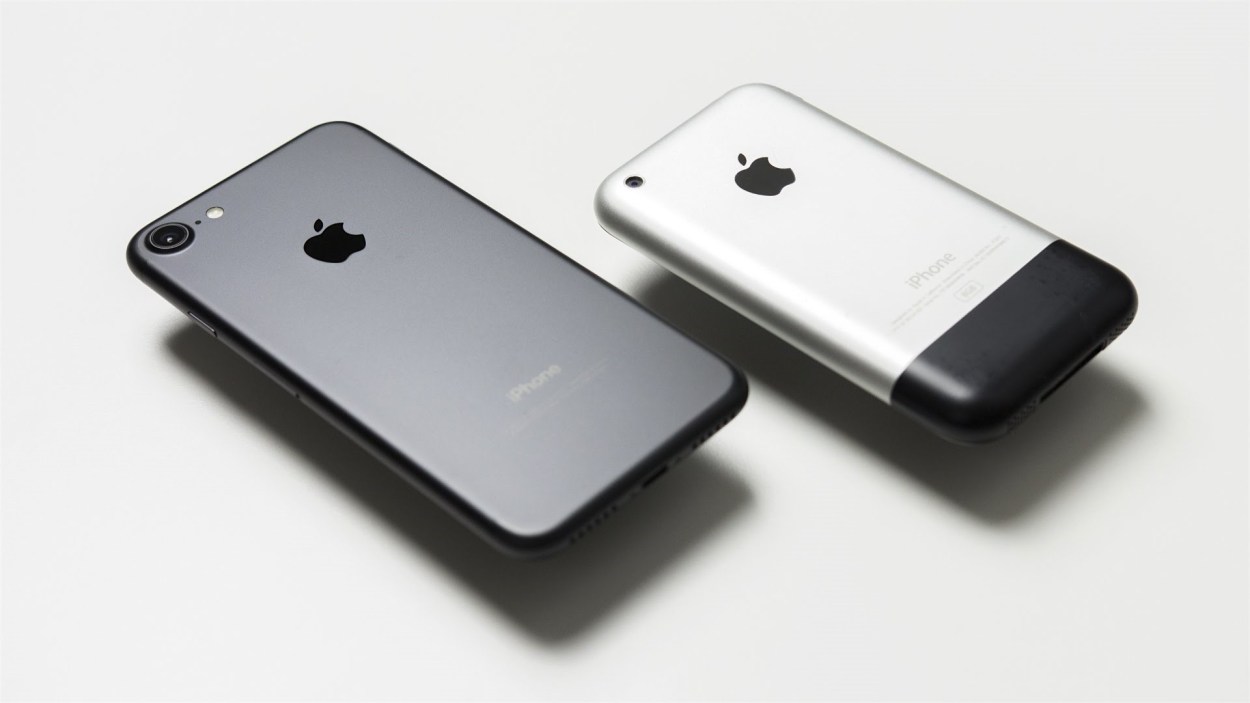 Apple’s original iteration of its smartphone, the iPhone, is now 10 years old and it’s fair to say a lot of changes have happened to the iconic handset since it first hit the market a decade ago.

The launch of the iPhone back in 2007 came off the back of extremely successful sales of Apple’s portable music player, the iPod. The iPhone was touted as an improvement on the iPod with revolutionary capabilities such as a touch controls, a camera, and of course voice calls and text capabilities. In fact, the iPhone was packed full of tech meant it just about replaced many standalone devices in one fell swoop.

Ten years on and the current version, the iPhone 7, is the latest version of the iconic smartphone released in 2007. Much has changed, but it can be argued that much has also remained the same. Find out how the original iPhone compares to the iPhone 7 as it celebrates this milestone.

As can be expected, the iPhone 7 represents all that Apple has learned and refined over the years to ensure that its product continues to meet the needs of its loyal customers. With that in mind, taking a look back at the design of the original device is likely to elicit a few negative comments about its aesthetics.

This is understandable, given that it is the 10 year anniversary of the handset and things have moved on quite a lot since then. The phone featured huge bezels surrounding the top of the phone, while the bottom half of the handset’s back was coated in a layer of thick plastic. The original iPhone was also 11.6 mm thick, which made it quite chunky.

To contrast the original iPhone’s design with the iPhone 7, consider that the newer phone comes in at 7.1 mm thick and has a bigger and wider screen. Both handsets are crafted from metal but on the iPhone 7 the rear plastic panel is gone although, more controversially, so has the headphone jack! Surprisingly, the original iPhone came in slightly lighter at 135 grammes compared to the iPhone 7’s 138 g.

Original iPhone vs. the iPhone 7 – Display

Another useful comparison point between the two handsets is the display. As mentioned above, the iPhone 7 has a bigger screen at 4.7 inches, while the first edition iPhone screen was 3.5 in.

Not surprisingly, the iPhone 7 has much better specs for its display as well; a 1,334 x 750 resolution at 326 ppi, compared to a 320 x 480 resolution at 165 ppi on the original. The iPhone was the first mobile phone to feature a touch screen in what was then a revolutionary capability, but advances in technology mean today’s devices have far superior displays with better resolution, touch response and size. 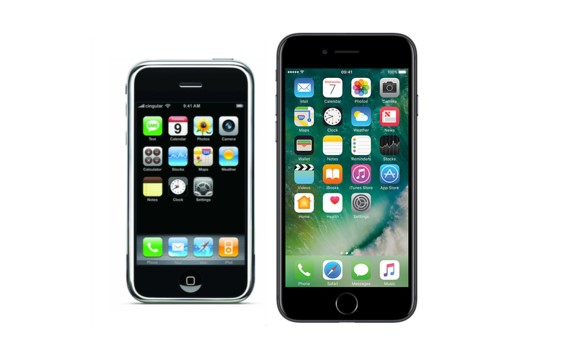 The original iPhone also marked the debut of Apple’s operating system, iOS. On the iPhone the first version of iOS was updatable until v 3.1.3 and featured a textured design inspired by objects in the real world such as leather-bound diaries, news agents’ shelves, and so on.

In comparison,  iOS 10 now features a flat design that makes the most of the digital and graphic capabilities of today’s smartphones. In the same way, the apps available on the iPhone 7 and, most importantly, what they can help us do are a vast improvement on the original device.

Internally, the original iPhone had a 32-bit 412 MHz Samsung processor and was offered with 4GB or 8GB in storage capacity. The much improved iPhone 7 is fitted with an A10, 2GB RAM processor, and the device comes in versions of  32GB, 128, or 256GB models.

Apple’s assertion at the launch of the original iPhone was that it could last for five hours of talk-time on a single charge. The progress made in battery tech in the preceding ten years means that the iPhone 7 has improved that to over 14 hours.

In terms of cameras, the same theme continues with today’s model boasting a 12 MP camera that can capture 4K video and has built-in autofocus and image stabilisation capabilities. The first iPhone meanwhile, had a meagre 2 MP fixed-focus camera.

As the original iPhone reaches its 10th birthday, it can be easy to take a look at it and chuckle. But the reality is that Apple revolutionised not only the mobile phone market with this handset, it also changed how we did many things in our day to day lives.

From taking photos, listening to music, or making notes, to mobile gaming and much more, the original iPhone is an iconic device that paved the way for what we see in today’s smartphones, especially the iPhone 7.

In conclusion, a comparison between the two handsets would inevitably show how far smartphone technology has come since the original iPhone was released. The improvements and differences are vast in many areas, but you can still see the foundation of where it all began, if you look closely enough.