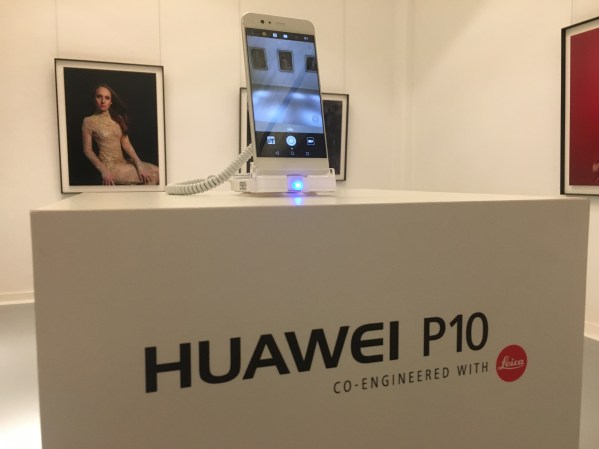 Billed as the smartphone of choice for digital photography, the P10 – like its predecessor, the P9 – boasts two rear cameras as well as a front facing camera, all with Leica optics.

Whereas the P9 had two 12MP lenses, this new model with a 5.1inch screen offers both a 20 + 12-megapixel dual-lens camera.

As well as collaborating with Leica for the lenses, the Chinese smartphone manufacturer has also partnered with colour company Pantone for various colour options. A total of eight different colours are available including greenery which is based on Pantone colour of the year 2017.

Other colour choices include dazzling gold, graphite black, rose gold, white ceramic, mystic silver, prestige gold  and dazzling blue, the latter of which we were given at the launch. Full test coming soon.

Features of the Huawei P10 include dual-SIM capabilities, a fingerprint reader which can now be found at the the front rather than the rear, and an out-of-the-box Android 7 Nougat operating system.

For the launch of the P10, Huawei has also partnered with seven renowned photographers –  including photographer of the Queen, Chris Levine, and Manfred Baumann- to use the Huawei P10 in their pictures. The exclusive works will be on display at the pop up exhibition in Barcelona, from 26 February until 2 March 2017.

Says Nigel Hurst, Gallery Director & Chief Executive of Saatchi Gallery:  “Technology is playing an increasingly important role in the work of artists, professional photographers and enthusiasts alike. We are delighted to be working with Huawei to explore new possibilities through the medium of photography.

As the world’s third-largest smartphone manufacturer, Huawei Consumer Business Group debuted on the prestigious Interbrand Best Global Brands list in 2014 and rose to number 72 in 2016.

You can see Andrew Garrihy, Chief Marketing Officer for Consumer Technology, Huawei Technologies, talk about the strategy behind the Huawei P10 launch on YouTube here.

TechDigest and ShinyShiny will bring you our interview with photographer and artist Chris Levine in the next few days.