There’s no doubt about it, this year’s CES show in Las Vegas was one of the best ever. Developments in AI (Artificial Intelligence) and the Internet of Things (IoT) means that just about anything is possible, technologically speaking.

In short, there’s nothing dumb in our lives that can’t be made a whole lot smarter with the help of a sensor connected to the net.

The only limit it seems is our imagination and whether the product is of any use. To be honest, the jury is still out on products like the smart parasol from Shadecraft – at least in the UK!

But while there were thousands of exhibitors from all over the world, the Brits seemed much quieter than usual.

Was this because, as show organiser Gary Shapiro claimed, the UK government is not doing enough to help its own start ups (see here for the full story)? Quite possibly.

“Britain’s been a little slow to the game honestly. We have a minister from Britain coming but there’s not a lot of activity that we’ve seen at CES. I think it’s a source of embarrassment,” he said, stating that nearly five times as many French companies are attending this year’s show as compared to British firms.

Certainly it seemed that way judging by the number of start-ups from France whose products we wrote about, compared to those from Britain.

However, there was at least some British activity. We’ve picked out five British start ups which were all doing interesting things at this year’s CES.

One company that was particularly critical of the UK Government’s lack of support for CES was start-up Smarter Applications.

Its managing director Isabella Lane said that other countries had offered support when the UK hadn’t.

“We’ve been invited to networking drinks from the Holland embassy and plenty of other European countries that have a presence there and support [their start-ups] by doing networking events.”

At CES2017, Smarter Applications launched a fridge webcam that alerts owners when food nears its expiry date. FridgeCam allows you to check what you have in your fridge via the app and alerts you when items are due to expire so that you can automatically replenish your fridge’s content.

The FridgeCam is the first wireless camera that fits inside any fridge, allowing you to see the contents from anywhere via the Smarter App.

In addition, the FridgeCam will also help track expiry dates, auto-replenish and suggest recipes based on the food in your fridge so, in theory at least, food wastage will be a thing of the past! 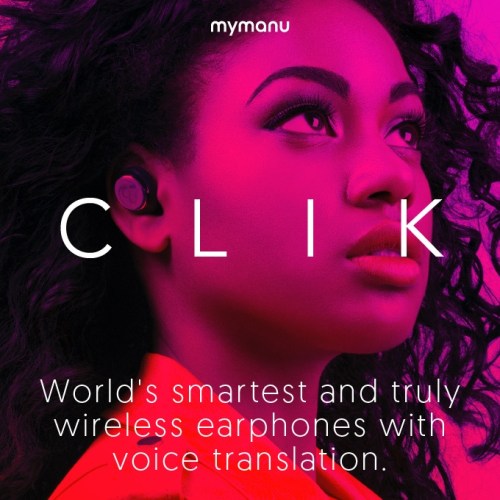 We first came across this company when the BBC’s technology correspondent Rory Cellan-Jones interviewed its founder, Danny Manu, after his struggles even getting to Las Vegas, let alone getting noticed as a one-man band amongst thousands of multi-national companies.

However, his innovative product should help him stand out among the crowd. Called Clik, it’s being billed as the world’s first truly wireless earbuds with live translation.

The idea is that you speak in one language and another person hears what you say in their own tongue, either via their own earbuds or via the MyManu smartphone app that Danny has already developed. MyManu claims it can translate 37 languages in real-time. How clever is that?

Already Danny has attracted nearly $250,000 on crowdfunding website Indiegogo here, with the unit available to pre-order for $199 (shipping expected May 2017).

Probably best known for not receiving its promised investment from Dragons Den Investor Peter Jones after problems with ‘due dilligence’, Scottish start up Connect-In unveiled its latest Bluetooth smart tracker at CES (its forerunner being myLupo).

Like rival products TrackR, Tile and the Nonda iHere (which we reviewed on Tech Digest here), Xupo can be attached to whatever you are sick of losing, such as keys, luggage, musical instruments etc. It also naturally interacts with your smartphone, meaning a click on its button can ring your handset.

Like the Nonda iHere, MyXupo comes with a remote shutter-release button so you also can set up your smartphone for a picture, say cheese, and click the device. Another idea includes using Xupo as a panic button to immediately call the police in the event of a personal attack.

You can also map a tracked object and see the exact location where it was last detected.

Former philosophy student Roland Lamb’s start up ROLI is revolutionising the piano. It’s behind the “Seaboard” which replaces black and white piano keys with a continuous, touch-responsive surface which, it claims, combines the expressive capabilities of many instruments in one interface.

ROLI has multiple design awards under its belt including  “Best of Innovation” award at CES in Las Vegas last year.

Founded in 2013 based on technology originally developed at the University of Bristol, Ultrahaptics has developed a unique technology that enables users to receive tactile feedback without needing to wear or touch anything.

The technology uses ultrasound to project sensations through the air and directly onto the user. Users can ‘feel’ touch-less buttons, get feedback for mid-air gestures or interact with virtual objects. This technology could lead to better virtual reality technology as well as completely revolutionise how we use the devices we have grown accustomed to.

At CES2017 you could create your own unique haptic sensations using the company’s Sensation Editor software. Want to create a virtual button that pulses on your hand three times? You can do that. Want to make it faster, slower, static or track your hand? You can do that too with a simple slider.