For disabled people unable to physically visit places around them, the world can seem a very limited place. But that may be about to change as Australian company Aubot has developed a robot called Teleport that can be controlled with the mind.

Using a simple off-the-shelf $200 brain control interface, which is typically used for meditation, it works by tracking mind’s focus.  Once a person concentrates over a certain threshold, the robot begins to move.

To toggle between going forwards, left, right, or backwards, the user only needs to blink their eyes twice.  The brain control device is easy to set up and calibrate, taking less than five minutes from unboxing until it is driving Teleport around.

As Teleport is moved around with the user’s mind or with simple actions, video is captured on its display and transmitted back to the user’s smartphone or tablet display effectively becoming their eyes.

Teleport has ultrasonic sensors at the front and back of the unit to prevent collisions, a wide angle lens for a greater field of view, web browser control, Android phone control and features a touchscreen tablet. 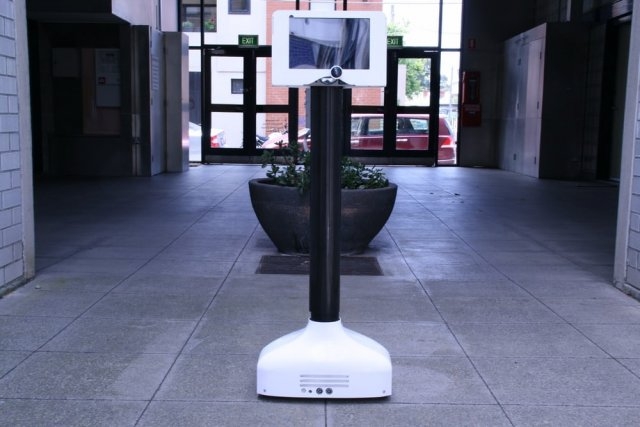 Adjustable between 1.1m and 1.7m tall, Teleport can sit around meeting tables or talk to people face to face. Teleport costs US $2800 which is inclusive of the tablet and drive-in charger, and works straight out of the box.

As well as being used in healthcare for sick children and the disabled, the Teleport – which started shipping in November 2016 – has even been sold to offices for telecommuting, companies with multiple offices for internal employee interaction as well as busy executives.

One brain control Teleport user is 36 year old Australian Anthony Bartl (pictured above). In a car accident when he was 6 years old which broke his spinal cord at the highest level, he now uses the Teleport to view the world around him remotely.

“It’s a real thrill, finding a new ability.  I could go through a museum in America, or wherever; see polar bears in the Arctic,” he says.

“I never really got anything to move before with my brain, so that was pretty unbelievable in that sense.”

Robotics company Aubot was founded by Marita Cheng, voted one of 2016’s Forbes 30 Under 30 for Asia and the 2012 Young Australian of the Year.

Previously, she founded international nonprofit Robogals, which aims to get girls interested in engineering, as well as artificial intelligence company Aipoly.

You can see how Aubot’s Teleport works in the YouTube video below.