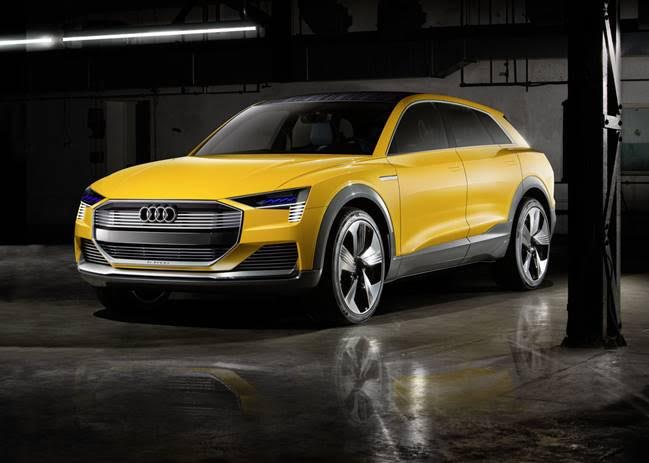 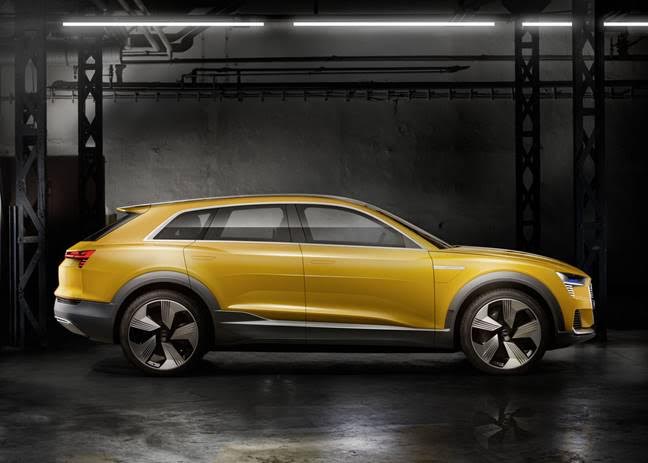 Apart from displaying the possibilities of fuel cell technology, the concept SUV boasts an impressive 600 km range (on a single tank of hydrogen), the ability to go 0-60mph in less than 7 seconds and a refuelling time of just four minutes. Even the speediest electric vehicles generally take nearly 20-plus minutes to get a decent charge!

The Audi h-tron quattro concept presents the fifth generation of fuel cell technology from Audi and Volkswagen. Lighter materials reduce the weight and, Audi claims, improve performance, responsiveness, service life and efficiency. With an efficiency rating in excess of 60 percent, the fuel cell now surpasses any combustion engine. The “stack” comprising 330 individual cells is housed in the forward structure with three hydrogen tanks located beneath the passenger compartment or luggage compartment.

Like many concept cars, the h-tron quattro also features a whole host of connected car technologies including the company’s piloted driving and parking technologies, hinging on what Audi calls the “central driver assistance controller.” The controller is a device that computes a model of the car’s surroundings in real-time, making the information available to the autonomous driving and parking systems in a similar way to Tesla’s Autopilot, featured here.

The combination of radar, camera and surround sensors supplies a complete model of the car’s surroundings. A laser scanner monitors the area in front of the car up to 80 meters (262.5 ft) away. All the data is brought together in the driver assistance system (zFAS) in real time. The computing power of the zFAS is equivalent to the entire electronics architecture of a well-appointed midsize automobile – but the high level of integration means the board is the size of a tablet PC.

The function for piloted driving in congestion currently being developed by Audi will in future reduce the driver’s workload in slow-moving traffic on express roads by taking care of the steering at speeds of between 0 and 60 km/h (37.3 mph). The system also accelerates and slows down on its own. With piloted parking from Audi, the driver will be able to control the car conveniently from outside, via the remote control key or a smartphone.

These features are expected to first hit the road in 2017 with Audi’s next generation A8 full-size sedan. The hydrogen SUV also includes curved OLED touchscreen displays on the interior.

Hydrogen-powered vehicles have long been thought of as a possible solution to the fossil fuel dependency of the car industry. However, as with any new technology the h-tron quattro and other hydrogen-powered cars face an uphill battle.

As Chris Ziegler of The Verge notes, hydrogen vehicles don’t currently have a network of refuelling stations and it will take decades before a proper system is built. So realistically we’re still probably years aways from a true hydrogen-powered vehicle going into production.

In other Audi News, despite being embroiled in industry scandal it seems that VW Group’s reputation among car enthusiasts is still firmly intact as it dominated the 2016 What Car? Awards yesterday evening. The annual industry bash saw the troubled German manufacturer get its hands on half of the 19 awards up for grabs, including Audi’s A4 family saloon which scooped the biggest prize of the night.

* During braking the battery is recharged – storing recovered energy

* Efficiency of the car is further boosted by a solar panel on the roof that generate up to 320 watts – adding up to 621.4 miles to the range annually 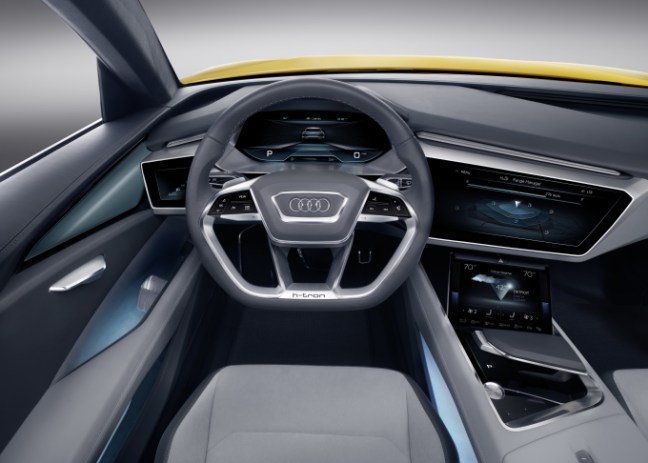