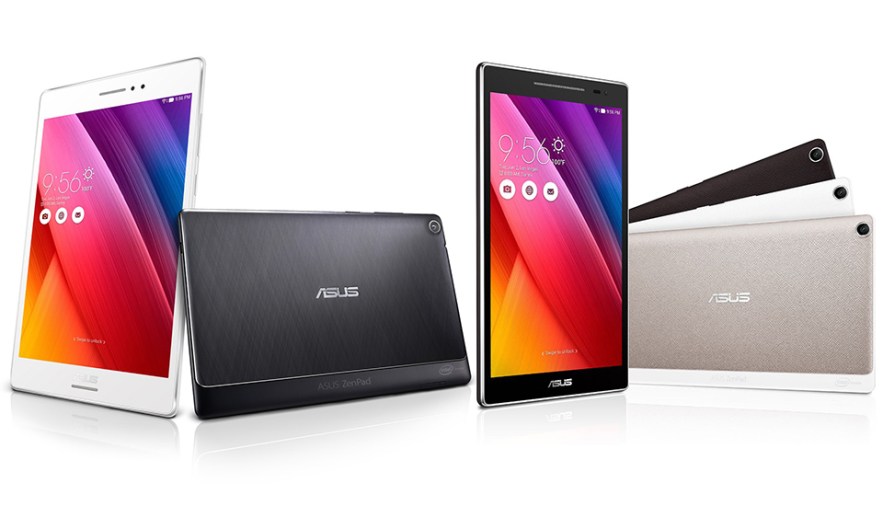 ASUS (officially pronounced ASOOS) may not be a brand you’ve heard too much about. But over the last few years it has become reasonably well established in the web tablet market, thanks largely to its collaboration with Google on the 2012 Nexus 7 tablet. Since then it has gone on to manufacture a number of tablet-type products including a 2-in-1 hybrid laptop/tablet called the ASUS Transformer Book which we reviewed here. In this review Chris Price tests out one of the company’s entry level, standalone web tablet, the ZenPad 8.0

Whereas earlier ASUS tablets felt a little plasticky, the ZenPad seems a sturdy piece of work with a classy rounded metal frame. Indeed it’s actually a little more heavy than I was expecting, tipping the scales at 350 grammes. Size-wise the ZenPad is a little longer than the iPad Mini (which has a screen size of 7.9 inches), measuring 209mm compared to 200mm. It’s also a little thicker at 8.5mm compared to 7.2mm for the iPad Mini. However, it’s not quite so wide as the Mini, measuring 123mm across compared to 135mm.

For those who like to personalise their web tablet, ASUS provides three different covers for the back which can be clipped on quite easily (see pic above). However, the colours aren’t particularly exciting – no reds. blues or yellows which would have been nice. In addition, there’s also a separate power charger which can clip on the back of the ZenPad instead. Costing around £35 from Amazon, the power case extends battery life by up to 16 hours, Asus claims, and is charged by placing the power adaptor into a small magnetic power block on top of the case. This is then removed when the case is attached to the ZenPad.

The only problem I found was that the Powercase does add quite a bit to the weight of the device as well as adding to its bulkiness. However, for regular users who are always running out of juice that’s probably a small price to pay for having the extra power onboard.

Another additional extra for the ZenPad (though not one we tested) is an audio cover which turns the mono sound of the tablet into 5.1 channel surround sound for a richer cinematic experience – although you will have to get mighty close to the screen to enjoy the equivalent visual experience. As well as a cinema mode, the audio case (pictured below) also offers music, gaming and speech modes for different types of audio input.

It’s a great idea although I’m not convinced that many people will choose to pay the extra to pair the tablet with a surround sound speaker system, given that the device is only £99 and the extra speakers will set you back £69 (in any case having checked online the speakers don’t seem to be on sale anywhere)

Given the £99 price tag I wasn’t really expecting a great display but actually the ZenPad is a pleasant surprise. Resolution is just 1280 x 800 pixels which is certainly nothing to write home about. Other similarly priced tablets like Tesco’s Hudl2 offer full HD resolution of 1920 x 1200 pixels – although Tesco has now run out of stock of this hugely popular web tablet and isn’t planning to restock.

Nevertheless, image quality from the ZenPad is actually fine. On screen icons are clear and clean and I certainly didn’t experience any blocking when I watched YouTube videos or TV programmes on the BBC iPlayer. Brightness levels are also fairly good although as with all web tablets we wouldn’t recommend using in direct sunlight. On board are several visual enhancement modes including Tru2Life and TruVivid which ASUS claim boosts dynamic range and improve screen clarity.

More disappointing are the onboard cameras which are really not that great. The rear facing camera offers just 5 Megapixels and the front facing ‘selfie’ camera just 2 Megapixels. As a result the images that I took of a beautiful autumn day in the woods near where I live (see below) weren’t exactly fantastic quality though I’ve seen worse.

Various picture modes are available including the wonderfully named ‘Beautification’ mode to improve selfies as well as various editing options for after the picture is taken including ‘big eyes’, ‘blush’, ‘thin cheeks’ and ‘soften skin’. However, these are all quite gimmicky. There are also various Instagram type filters to turn your images into an oil painting, a charcoal drawing or sketch etc.

While screen quality is certainly acceptable the same can’t be said for audio. Sound quality is exceptionally poor. Listening to Adele’s monster hit, Hello, on YouTube I found the audio extremely tinny. This is partly because there is just one small speaker on board compared to more advanced and expensive tablets such as the iPad Mini which offer stereo sound.

I definitely wouldn’t want to use this tablet for watching TV programmes or listening to music for a long period of time though it’s fine for listening through a decent pair of headphones. Of course ASUS offers the audio cover if you want to boost audio with surround sound but costing £69.99, this seems a little excessive for a tablet with a price tag of just £99.

Powered by a quad-core Intel Atom X3 CPU, ARM Mali-450 GPU and 1GB of RAM the ZenPad’s specs aren’t great compared to other tablets. But again we  didn’t experience too many problems and given the price it’s certainly not too bad. An Android web tablet, the ZenPad runs an adapted version of the latest Android 5.0 Lollipop operating system and there’s a Micro SD card slot for expanding storage beyond the 16Gb provided on board.

It’s certainly not going to rival more expensive and superior spec tablets like the iPad Mini, but given it’s £99 price tag (recently reduced from £119) the ZenPad was never expected to.  For surfing the web, accessing emails etc. it’s a great little device with a lovely bright screen. However, I wouldn’t recommend it if you spend too much time playing audio through the tinny speaker. It’s available from PC World here.