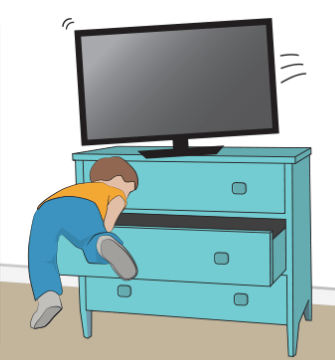 In Association with TV Furniture Direct

After last week’s news that Ikea’s MALM drawers killed two toddlers in separate incidents, industries have gone into overdrive about re-affirming the safety of their products or adapting them to be safer.  Ikea’s own advice is to use wall-anchoring kits to prevent tip over hazards, but a fact that was overlooked was that over 70% of fatal injuries from tip overs are caused by TVs and furniture that is supporting a TV.

But how severe is this problem? Well, newly released figures from the CPSC (consumer product safety commission) actually paint a more positive picture than studies reported up to 2012.

In 2012 deaths from tip over TVs were the highest in history, a staggering 43 fatalities were registered with the CPSC which is an agency that reports only within the US. But in 2013, fatalities from tip over TVs dropped by 50 per cent to 21 deaths – the first time since the year 2000 and the reason could be due to improvements in technology. They then rose slightly to 27 in 2014.

The reasons for the 50 per cent decrease seem to be from the excellent work the CPSC did on marketing the worrying trend and creating parental awareness. However, the drop maybe also down to TVs themselves becoming thinner and lighter.

The CPSC believes the increase in fatalities was due to parents buying a new flat screen TV while the older and larger style CRT TVs were put upstairs in kids bedrooms and positioned poorly on furniture, such as chairs and chests of drawers. The gradual upgrading process has seen  CRT TVs becoming obsolete, as parents get bigger screen sizes, replace them with HD, 4K and OLED.

Nevertheless, the numbers are still shocking. In 2014 a child died every other week from a tip over accident in the US alone, with over 200,000 reported accidents over the past 20 years. The official advice from the CPSC is to either mount your TV using a quality tv bracket or buy safety straps to secure the furniture.

Original data and infographic from TVfurnituredirect.com