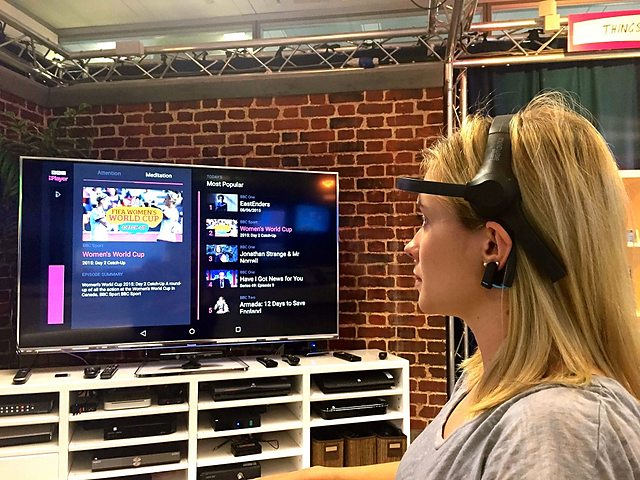 If this was April 1st then I would be suspicious, but it’s not and it seems that being able to control your ‘smart’ TV with your mind could actually be a thing. Apparently both YouTube and the BBC iPlayer could be set to integrate MindRDR TV (Mind Reader TV, geddit) technology into their content platforms very soon.

Developed by user experience company, This Place, MindRDR is a ‘thought interface’ which connects with Neurosky’s EEG brainwave sensor. MindRDR TV enables the Neurosky EEG – which measures brainwaves to translate brain activity into action – to communicate directly with a mobile device (e.g. Android tablet which can be Chromecast to a TV). This allows users to control actions on the TV and tablet by simply changing their mental state.

Once the headset is worn and paired to a mobile device, a selection of the top five most popular TV programmes is displayed to the user. The interface cycles through each programme until the user selects an item based on their calibrated brainwaves. The selected program will then playback automatically until the user focuses to go back to the discovery interface. MindRDR TV allows users to personalise their control focus to either concentration or relaxation modes.

Based on focused research looking at reducing false positives and fatigue, users can now use the thought interface with a good level of accuracy and for extended periods of time. MindRDR TV is the first app to feed off This Place’s research into practical brain signal processing for UX.

So does it work? Yes according to the BBC. In trials 10 BBC staff members tried out the app, and all were able to launch BBC iPlayer and start viewing a programme simply by using their minds. It was much easier for some than it was for others, but they all managed to get it to work. And it’s been a similar story for everyone who’s tried it out in BBC technology Blue Room since.

YouTube and the BBC iPlayer are the first two content platforms to get special experimental MindRDR TV interfaces, via bespoke apps, with further platforms supported in the future.  MindRDR TV utilises standard deep-linking to feed off existing on-demand IPTV platforms so can be deployed universally with partner platforms.

This Place is now also talking to TV enablers, such as OEMs, EEG Brainwave sensor manufacturers and service providers about integrating MindRDR TV into the big screen proposition.

MindRDR TV, which was created through focused development and user research, was created by the team behind MindRDR, the thought interface for wearables. Launched in 2014, it allowed users to control Google Glass with their minds.

MindRDR TV is the first platform to solve one of TVs biggest problems in user interaction.  Says Dusan Hamlin, founder and CEO of This Place, says: “We’ve always been interested in the challenge of ‘smart’ TV interfaces. They can be extremely difficult to navigate with a remote control or even a second screen device.

“So we decided to focus on dramatically improving the user experience by removing barriers between users and the content they want to watch.  In fact, we removed every single barrier so people can directly control TVs with their mind.”

The Android version of MindRDR TV for YouTube is being prepared for a limited research focus release on the Google Play store.  The iPlayer version has been commissioned by the BBC as an internal development project and is not available for public use. Yet.

It all sounds great. But it does rather beg the question who takes control of what channel you are going to watch on TV if there’s no remote control anymore. Are you just going to have to outthink your family members?

One thought on “Control your TV with your mind. Smart TVs get smarter with MindRDR technology”